It is often said that a typical characteristic of successful business leaders is that they know how to surround themselves with good people. Naresh Goyal is one who subscribes to that philosophy. 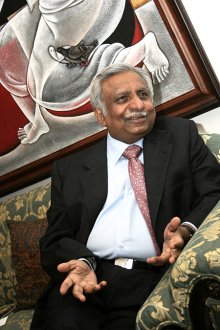 When he established India’s Jet Airways in the early 1990s he knew that he needed to bring in foreign expertise. From day one he recruited executives from international airlines to bring in different perspectives in management. He also chose to appoint board members with years of industry expertise, also from different parts of the world.
To this day, Goyal’s board at Jet, which is now India’s largest privately owned airline, is stacked with aviation industry veterans from all over the world. Goyal remains chairman and makes clear that he is the ultimate boss, but he still has foreign managers running day-to-day operations. The current chief executive is Wolfgang Prock-Schauer, a former Austrian Airlines executive, while the current chief operating officer is Peter Luethi, who was previously with Swiss. Foreigners are also involved in running many different parts of the fast-growing business at other senior manager levels.
“Right from the beginning we have studied the mistakes that other airlines have been making so we don’t make them ourselves. That is why the selection of the management and the board was so important from the beginning. I chose people who knew the mistakes that others had made, and who themselves may have made many mistakes in their lives,” says Goyal.
“To this day, the board and me we look all the time at what are the mistakes being made so we can improve on them. We still make mistakes – you cannot always be right – but we recognise when the mistakes are made and we work on them.”
Goyal says corporate culture is something he also focused on from day one when Jet was in the planning stages. His model in this area was Southwest Airlines, whose legendary founder, Herb Kelleher, is someone Goyal admires greatly.
“Herb is an institution by himself. A generation will remember him. He has time for his employees. He is there, and people believe in him,” says Goyal, who adds that he has met Kelleher only once, several years ago in Washington DC.
“He is a genius. He is amazing. I really, really admire him. The man is hands on and oh how his employees love him,” he says.
Those who know Goyal say he can be eccentric at times and that he always gets what he wants. However he can be a very good listener when he is interested in someone or something, and is like a sponge in some ways, soaking up information that can ultimately help him and his many businesses. This is why Goyal has a long list of people from the business world that he says he admires and has learned from over the years.
One is JRD Tata, the late founder of India’s first airline, Tata Airlines, which is now known as Air India. Goyal says he greatly respected Tata, a former neighbour in Mumbai, not only for what he did for aviation in India but because he “created wealth, employment, jobs and helped the economy”. He also considered as a mentor a legendary former chairman of Singapore Airlines, JYM Pillay. Pillay was chairman of the airline between 1972 and 1996, during which time he oversaw the airline’s transition from small national carrier into true global player.
“I have learned a lot from him and I have always admired Mr Pillay,” says Goyal. “He has been a role model for me.”
There are also current business leaders that Goyal sings the praises of. These include Sir Rod Eddington, the recently retired chief executive of British Airways who now sits on the board of several international companies. Another is the maverick Tony Fernandes, founder and chief executive of Malaysian low-cost carrier AirAsia.
Goyal says that studying other people’s business philosophies has helped him greatly over the years. From the start of Jet he also looked carefully at how other airlines were run and adopted the policies of those that he considered the best in the industry.
When he started Jet he decided he needed to model the airline on those which have what he believes are the best service standards: Hong Kong’s Cathay Pacific Airways and Singapore Airlines. Both have young fleets and both are renowned for their services, which Jet itself has developed a good reputation for over the years.
While Jet has many challenges today as other airlines in India seek to eat into its domestic market share and as it seeks to rapidly expand its fledgling international operations, Goyal is satisfied that so far Jet has done “quite well”. But he says there is much more to achieve, and he needs to stick to this mantra to stay passionate about what he does.
“I am still not happy. I know every day there are problems and I still look at details,” says the energetic 56-year-old, who has become a very wealthy man out of Jet’s successes.
“In life it is always a fight. Nothing comes easy and that is where my passion comes from.
“I didn’t do this for the money. Money is important – we all need money. But it is the passion that is in me in knowing that we can achieve that makes me do this.”