NASA has selected Lockheed Martin to design a half-scale supersonic X-plane with boom-suppression technology in an effort to lift the international ban on flying faster than Mach 1.0 overland.

The announcement on 29 February at Washington National Airport launches the preliminary design phase of the quiet supersonic technology (QueSST) programme.

NASA administrator Charles Bolden linked QueSST with the agency’s legacy of high-speed research, beginning with the rocket-powered Bell X-1 that first broke the sound barrier in 1947.

“Now we’re continuing that supersonic X-plane legacy with this preliminary design award for a quieter supersonic jet with an aim toward passenger flight,” says Bolden.

A rendering released by NASA shows reveals a design with an elongated nose designed to attenuate the effect of the supersonic shockwave that develops when aircraft fly faster than M1.0. 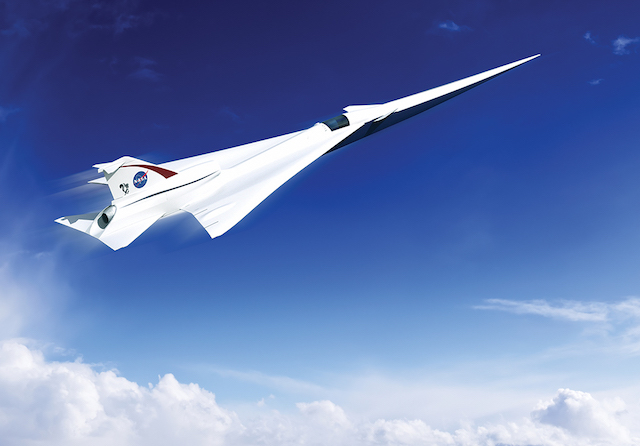 The single-engined design also features a vectored thrust nozzle, delta wing and two forward control surfaces mounted forward of the cockpit. Intriguingly, the design shows a cockpit with an upward-facing window but no forward-facing windscreen.

Some systems suppliers, such as Honeywell, have suggested that aerodynamic requirements would force a future supersonic aircraft to rely on enhanced or combined vision systems to provide a visual picture for the pilot.

NASA has previously described the low-boom supersonic demonstrator aircraft as a prototype weighing about 25,000lb, which is large enough to accurately replicate the acoustic signature of a 100-seat airliner weighing up to 300,000lb.

The US Federal Aviation Administration has banned supersonic flight overland since the late-1960s. A similar restriction is also in the ICAO rulebook.

Such regulations conspired to limit the business case for the Aerospatiale/BAC Concorde, of which only 16 were sold. The Air France and British Airways fleet was retired in 2003 with no replacement.

In the past decade, several companies have expressed interest in supersonic technology for the business-jet market. Airbus-backed start-up Aerion believes a market exists for a supersonic business jet that can fly above Mach 1.0 only over water.

But other companies, including Gulfstream, are not so sure, believing the market is sustainable only if the ban on supersonic flight is overturned.

That regulatory change can’t happen until an acoustic survey is performed using a representative aircraft.

NASA plans to start building the supersonic X-plane in 2019, with first flight scheduled in 2020. The acoustic survey would begin in 2021 in southern California and continue for several years.

More recently, NASA in 2010 funded Lockheed and Boeing to study separately whether modern technology can reduce the acoustic signature of a supersonic jet to levels that are not bothersome to the ears of people or livestock.

After both contractors’ preliminary results indicated it was possible, NASA funded a second phase of the studies, which included analysis of wind tunnel models. Lockheed published the results of that study last year, finding that boom-suppression technology can reduce the noise signature of a 100-seat supersonic transport to about 75EPndB, well within the 80EPndB threshold estimate for nuisance sound in the human ear.