Textron AirLand is courting the US Navy in its quest for a Scorpion Jet launch customer, with the seafaring service exploring ways to keep its Boeing F/A-18 pilots mission-ready without having to put too many extra flight hours on its war-fatigued fighters.

The Scorpion project is also pursuing airworthiness certification with the US Air Force under a new initiative designed to make American military products more attractive on the international market.

Textron AirLand president Bill Anderson says the subsonic surveillance and strike aircraft attracted significant interest from several prospective international customers during a recent visit to Washington, DC, but the team also engaged with representatives from the US Defence Department and navy.

“They recognise the Scorpion’s capability for maritime patrol, but they are really looking for ways to keep their pilots relevant and mission-ready without having to fly all those hours on high-end assets – in this case their Super Hornets,” Anderson tells Flightglobal in an interview. “And, from a testing perspective, the navy is using old [Lockheed Martin P-3 submarine hunter aircraft] for some sensor and even weapons testing at an exceptionally high cost per hour and very, very low readiness. So they see the value of the aircraft from a test perspective.”

Many older and newer navy F/A-18s are running up against the end of their structural lives far sooner than planned because of enduring operational commitments and the slow introduction of the Lockheed Martin F-35C. It appears the navy is now looking for ways to avoid putting all of those extra pilot training and qualification hours on aging mission aircraft, at least for low-end missions.

“A lot of air forces are looking at [the Scorpion] because their fourth- and fifth-generation fighters are actually running up against their life limits and they’re very hard to maintain and very expensive to operate – but you have to keep your pilots mission-ready,” Anderson adds. 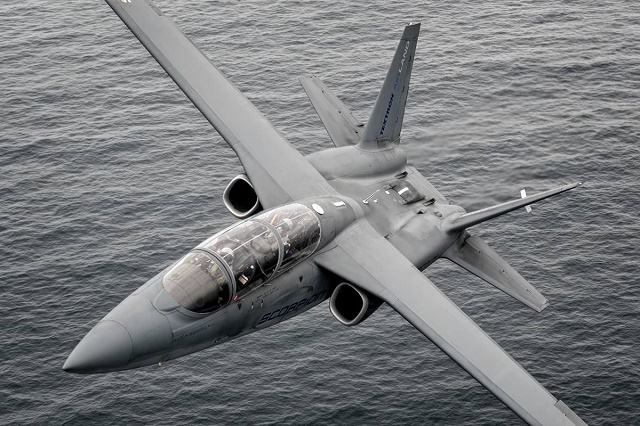 The Scorpion is being pitched to some nations as a maritime patrol aircraft.

The Scorpion team has been scouring the globe in search of a military customer, or perhaps even a commercial supplier of fighter pilot training. To date, there have been plenty of nibbles but no firm commitments or orders.

Still, Textron remains committed to the Scorpion project even at significant cost, and a second production-representative example is being assembled with plans for first flight in 2016 – possibly in May.

“Obviously this is a military programme. We’re not really selling onesies and twosies – we’ve got to get an air force to commit to buying a fleet of these airplanes, which would make sense for the country,” Anderson says. “Those efforts take a little longer than selling individual airplanes to commercial customers.”

Anderson says to make the aircraft more attractive to potential buyers, Textron has expressed interest having USAF certify its second example in the updated configuration.

The service has sought responses from industry for a new initiative where companies can certify their aircraft with the military at their own expense.

“We’re ready to go,” Anderson says. “It’s clearly in the interest of the United States to help US industry be competitive overseas. Since the US Air Force is a recognised world-class air force, I think it would mean a lot in the international market.”

The current Scorpion demonstrator is operating under an FAA experimental type certificate, and Anderson says Scorpion will meet even the most stringent US military airworthiness standards. 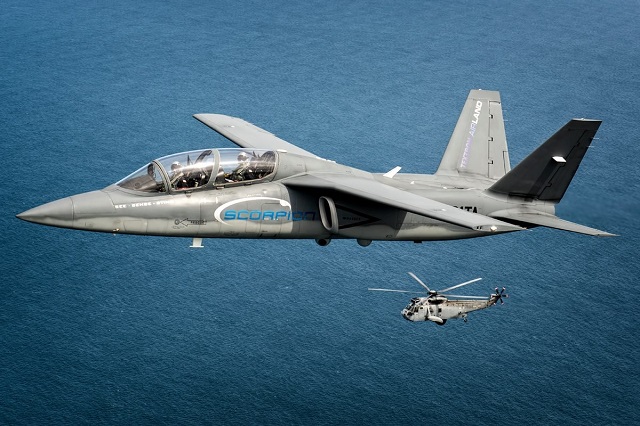