Piaggio Aero is stretching the legs – and widening the appeal – of its P180 Avanti II twin-pusher, signing a launch deal for a new 1,720nm (3,200km)-range aircraft with a Chinese operator.

SR Jet of Beijing has ordered two, and taken options on a further eight, of the revamped aircraft, which has an additional tank fitted in the wardrobe next to the lavatory, extending its range by 250nm.

The deal was signed with Piaggio’s mainland China distributor, CAEA (Beijing) Aviation Investment and the P180s will be delivered to China from March 2014.
SR Jet is part of Sparkle Roll Investments, which set up its aviation subsidiary a year ago to “aggressively develop the commuter and business aviation industry” in China. 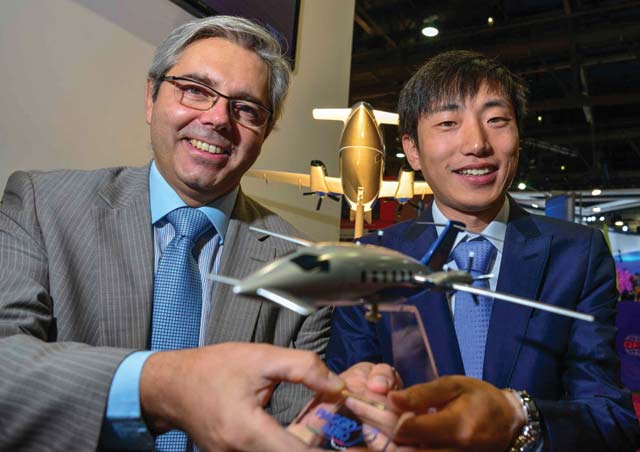 Giuliano Felten, Piaggio’s chief commercial officer, says the extended-range Avanti will be offered to customers as an option, but he expects it to become the standard variant. “It gives you more flexibility,” he says. “The cost is negligible – a very small space in the rear cabin and 30kg of extra weight.”

He adds: “Today’s agreement is a great achievement of the marketing efforts that Piaggio Aero and CAEA Aviation are devoting to the Chinese market.”
The Chinese deal will come as a relief to the Genoa-based company, whose biggest customer, US fractional Avantair, collapsed earlier this year, leaving 40 cancelled orders and a fleet of around 56 fractionally owned aircraft in limbo.

The fleet has been grounded since the winding-up of the Florida-based operator in early summer with the US Federal Aviation Administration requiring full airframe inspections by Piaggio before the aircraft can resume flying. Although Piaggio’s efforts had been stalled by the recent US government shutdown, the checks have now resumed and the first two Avantis have been re-certificated. Piaggio says about 45 aircraft are fit to return to the air. The remaining 11 are early versions of the Avanti, which has been in production since the early 1990s.

Check out all the news and views fromNBAA