With Iran's rapprochement with Europe now well under way, airlines are rushing to re-establish links with the former pariah state.

Following the lifting of EU sanctions, Air France has disclosed plans to resume flights from Paris Charles de Gaulle to Tehran in April, while British Airways will resume services from London to the Iranian capital in July.

They join Germania, which added routes from Berlin and Dusseldorf last year; Eurowings, which begins services from Cologne to Tehran in March; Lufthansa, which will add services from Munich from April; the German group's subsidiary Austrian, which will link Vienna with Isfahan from April; and Air Astana, which plans a return to Tehran this summer.

Iran Air and Mahan Air are currently the only airlines connecting a number of cities direct to the Iranian capital. Flag carrier Iran Air is the sole operator on services to Amsterdam, London, Gothenburg, Hamburg and Stockholm, while it shares the Milan-Tehran market with Mahan.

Freed from refuelling limitations at European airports, Iran Air might find that a number of new European routes become economically viable. With several aircraft deals now tentatively agreed, the flag carrier will have opportunities to expand its network significantly.

But Innovata schedules show that it is Turkish Airlines that has used the years of Iran's economic isolation to establish itself as the leading carrier in the market.

Going from being the second-largest airline by seat capacity in April 2011 – more than a year before EU sanctions over Iran's nuclear programme were imposed – Turkish had become the biggest airline in the market by April 2016, with a share just under 30%, followed by Mahan with 16%, Iran Air with around 14% and privately owned Iranian carrier Qeshm Airlines with 6.8%. European airlines such as Lufthansa and KLM lost market share during the period.

Innovata also shows that, again in terms of seat capacity, the Istanbul-Tehran route is by far the largest, making up 55% of the total, which suggests that a big proportion of Iranian traffic is either bound for Turkey or being funnelled through Istanbul from other points in Europe.

At present, Turkish is also the only carrier to have penetrated beyond Tehran to serve points such as Mashhad, Ahwaz, Shiraz and Kermanshah.

So what are the opportunities for further route development into Iran?

In a July 2015 report titled Economic Implications of Lifting Sanctions on Iran, the World Bank estimates that sanctions reduced Iranian exports by $17.1 billion during 2012-14, equivalent to 13.5% of the nation's total exports in that period.

The World Bank notes that in the first half of the last decade, Iran's major trading partners were Germany, France, Italy and Greece, together accounting for more than one-third of Iran's total exports and imports.

With the election of Mahmoud Ahmadinejad as Iranian president in 2005, this declined as relations with the USA and western Europe soured. New partnerships were brokered in Asia. By 2014, China followed by India, Turkey and Japan had emerged as Iran's major trading partners.

World Bank analysis suggest that the removal of sanctions on Iran means exports "will increase substantially" for the UK, Turkey and Saudi Arabia. It expects that this will "include a reopening of oil and gas exports which was halted previously". Trade with France, Germany, Italy and the UAE is also set to increase but "with a lesser magnitude".

Oil and gas are Iran's largest export commodities, and the World Bank report cites Iranian officials' estimate that "the oil and gas sector needs $130-145 billion in new investment by 2020 to keep oil production capacity from falling".

This could create new opportunities for airlines seeking to develop lucrative oil routes, but the commodity's price decline has the potential to make this much less tempting than it would have been previously. 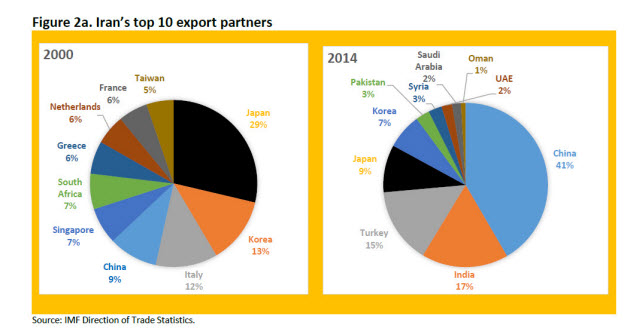 Imports meanwhile are "likely" to "shift towards” the USA, Germany, Netherlands, South Korea, China and Singapore over the coming years, the World Bank suggests. Currently, the UAE is Iran's biggest source of imports, followed by China and India. 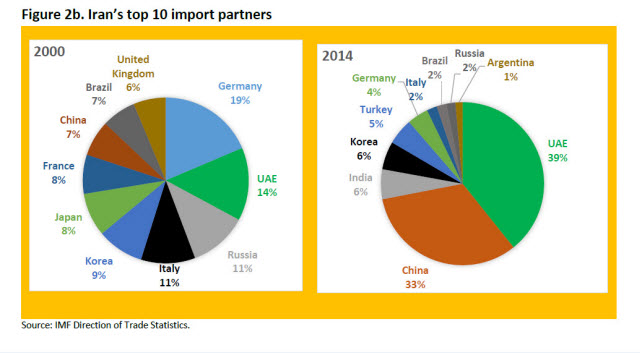 The World Bank estimates that Iran holds about $107 billion worth of frozen assets overseas, some of which are already set to be released with the end of sanctions.

Meanwhile, it estimates that foreign direct investment, which declined following the tightening of sanctions in 2012, will increase to about $3-3.5 billion in a couple of years, double the level of 2015 but still below the peak in 2003.

The World Bank estimates that foreign direct investment inflows could be $3-3.2 billion in 2016 and 2017 if Iran's economy returns to 5.5% growth. Europe and the UAE could become major investors in Iran, it says.

Travel market research agency Euromonitor notes, in its Global Trends report, the growing popularity of Iran among European holidaymakers, describing the nation as the "next big tourism destination" in the Middle East.

"The more active involvement on the side of the Iranian government, which is now aiming to promote tourism for the first time in years, is a good sign for eager investors and tourism players," says Nadejda Popova, senior airlines analyst at Euromonitor. "For example, many nationalities, such as French, German and Russian citizens can obtain a visa upon arrival."

She notes that France is now heavily involved in the development of Iran's air transport sector and says signs that Iran is eager to upgrade its tourism infrastructure will help encourage more arrivals into the country.

"The years of international isolation have left tourism infrastructure in need of major investment, particularly hotels, facilities and transportation. To meet increasing airline demand, the country's dilapidated transportation infrastructure urgently requires a revamp. The Iranian government appears to be keen to inject the much-needed boost, by opening expansion projects for its main airports."

The Iranian revolution in 1979 and the resulting political turmoil led to large-scale emigration, creating a number of large expatriate communities in Europe and the USA.

Data from Eurostat suggests that the Nordic states have significant Iranian populations – close to 70,000 in the case of Sweden – providing opportunities for visiting-friends-and-relatives traffic. 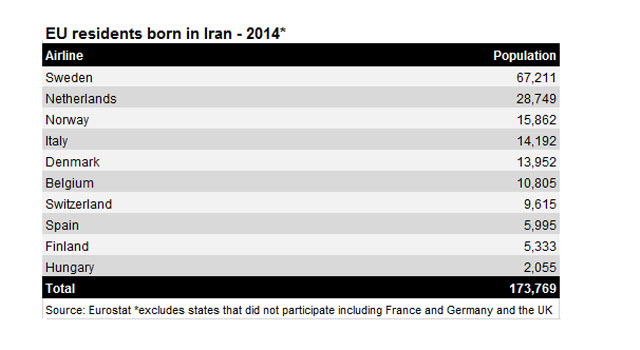 While Mahan plans to start flights from Tehran to Danish capital Copenhagen in March, and Iran Air operates to Stockholm and Gothenburg, there is no direct link to Oslo or Helsinki, suggesting a definite opportunity for new routes.

However, with SAS and Norwegian battling it out on Atlantic routes and Finnair focused on eastern Asian markets, Popova expects growth in this market to "probably be slower than to Germany, France and the UK".

Eurostat data shows that the Netherlands, Italy and Belgium also have sizeable Iranian populations and could be in need of more air services. However, it should be noted that because it is not compulsory for EU members to submit population data to Eurostat, the picture is not complete, with France, Germany and the UK notably absent.

Popova sees France and Germany as ripe for more air service because both "have large Iranian diaspora populations", and notes that France is now heavily involved in the refurbishment of Iran's airports.

She believes air connections could be established between Spain and Iran as a result of plans by the two countries to jointly develop an oil refinery in the Gibraltar straits.

Currently, 24 EU member states have bilateral air services agreements with Iran. However, there is actual passenger traffic to/from Iran with only eight of them: Germany, Italy, Sweden, Austria, the UK, the Netherlands, France and Greece.

The European Commission has hinted that there is the potential for an open-skies agreement with Iran along similar lines to the ones it has signed with the USA and Morocco as well as those it is hoping to agree with the Association of Southeast Asian Nations (ASEAN), Turkey and the Gulf states.

However, while Iran's restored relationship with Europe offers new opportunities for airlines, concerns over safety and security arising from regional volatility might put the brakes on further route development.

Euromonitor's Popova notes that "ongoing tensions with Israel, Saudi Arabia and other regional powers means there is a lingering threat of violence and instability". She adds: "Strongly devalued local currency in recent years has also affected Iranians purchasing power and hence their capacity to take trips both internationally and regionally."