Chinese airline executives are raising concerns about the availability of frequencies to continue expanding to the USA.

“Both US and Chinese carriers are brushing up against our ceilings,” said Zhihang Chi, vice-president for North America at Air China, at the Boyd Group International Aviation Forecast Summit in Las Vegas on 31 August, referring to the current frequency limits. He adds that capacity growth could be stymied without raising the limits.

Airlines can also fly an unlimited number of flights to cities in China’s zone three, including cities like Chongqing, Chengdu, Dalian and Wuhan.

Both Chinese and US carriers are nearing the limits, as Chi says. Chinese carriers are using about 161 of their 180 frequencies, a Flightglobal analysis of Innovata schedules finds.

US carriers are using 145 of 161 available frequencies – the additional one is a converted cargo frequency used by Delta Air Lines that would likely revert to its previous cargo-only status if the carrier returned it to the US Department of Transportation, regulatory filings show. 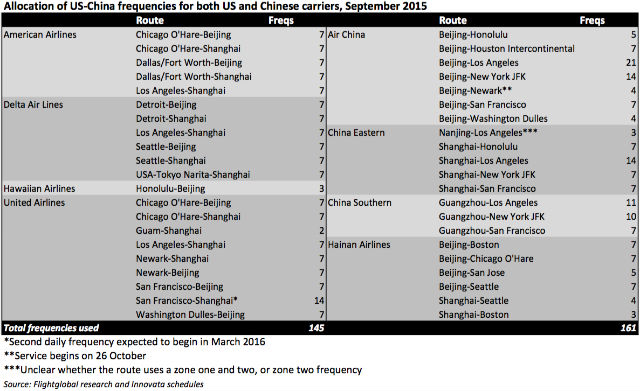 With so few frequencies left to China’s biggest cities, is it time to raise the limits?

Air China and Hainan Airlines want to grow now. Hou Wei, vice-president of Hainan, said at the Boyd Group summit that they have had a lot of success serving “non-traditional” US gateways like Boston and Seattle Tacoma from Beijing and Shanghai and would like to continue growing.

However, the Chinese government limits just one Chinese carrier to any particular city pair, so Hainan cannot enter markets like Los Angeles or New York John F Kennedy from Beijing or Shanghai that are already served by Air China or China Eastern Airlines.

Air China’s Chi says the Star Alliance carrier would also like to grow to the USA, especially to secondary cities once it begins taking Boeing 787-9s in 2016.

“The US government denied our request for more flights,” he says. “We are worried that the debate with the Middle Eastern carriers has spilled over.”

Chi was referring to a request for more frequencies from Chinese officials during US-China air service bilateral talks that were held in Washington DC in May.

Flightglobal understands that during the May talks, US officials had raised concerns over the availability of ideally-timed landing slots for US carriers at Chinese airports.

United Airlines, the largest US carrier in China, had planned to begin a second daily flight between San Francisco and Shanghai Pudong in May but has been forced to postpone the launch three times to at least March 2016 due to a lack of suitable slots at Pudong airport.

However, the Chicago-based Star Alliance carrier also has big growth plans for China.

“So much of the demand growth out of China as we look out at the next five years is in the secondary cities,” says Jim Compton, chief revenue officer of United, at the Boyd forum. “That 787 is just the perfect aircraft to serve that developing market.”

The airline used its 219-seat Boeing 787-8 to launch San Francisco-Chengdu service in June 2014 and has repeatedly spoken about growing in other secondary markets.

United and other US carriers can add an unlimited amount of service to Chengdu, as well as other Chinese markets away from the zones one and two, under the existing bilateral.

United has the option to “push pause” on its plans to grow in China if it wants, said its vice-president of network Brian Znotins in August.

American Airlines and Delta also plan to grow in China but their growth has been focused on expanding service to Beijing and Shanghai from their hubs in the USA to date.

The three US mainline carriers decline to comment on the availability of US-China frequencies.

“We believe that there are sufficient frequencies at present, but given expectations for future traffic it is clear that the current arrangements will soon be inadequate to meet demand,” says a spokeswoman for Hawaiian Airlines.

Honolulu-based Hawaiian entered the China market with three-times weekly service to Beijing in April 2014 and its executives have repeatedly spoken about the opportunity in the market.

“Over time, there is going to be so much more capacity added from the Chinese airlines,” says Helane Becker, an analyst at Cowen. “You have the US guys wanting to grow. I think you’ll see growth.”

Asked whether she was concerned about a repeat of the situation with the Gulf carriers, she says no. “Everybody has agreements with everybody else,” she says.

In addition, China is a large market where the US carriers can serve a wide array of cities whereas in the Gulf they are often limited to a single point.

American, Delta and United have claimed that Emirates Airline, Etihad Airways and Qatar Airways are dumping subsidised capacity in the US market.

US airlines may want to wait for the market to absorb some of the rapid growth over the past two years. Seat capacity between China and the USA increased 16.8% from January through August compared to the same period in 2014 and 22.6% during the period a year ago, Capstats data shows. 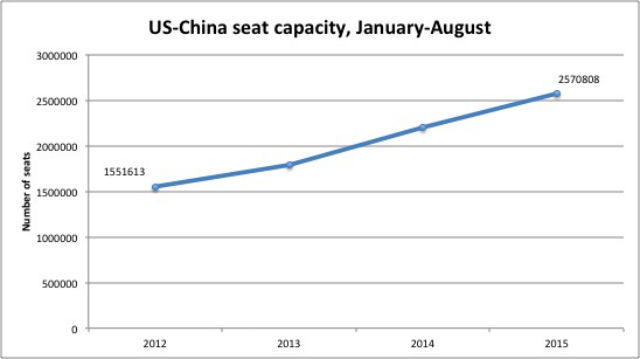 The US carriers have reported yield pressure as a result of this competitive capacity growth but Znotins said that they have seen no indications that the weakening Chinese economy has had an impact.

“Everybody is going to try growth from China – if it makes sense – from their hubs,” says Becker. “If it doesn’t work, they’ll just dial it back.”

For example, Delta launched daily service between its Atlanta base and Shanghai Pudong in 2008 only to end service in 2009. It attempted the route again from 2011 to 2012.

The current US-China frequency regime was put into place in July 2007. At the time US carriers used far more of their allotment than Chinese carriers did, with every major carrier – including Continental Airlines, Northwest Airlines and US Airways that have since disappeared through mergers – seeking additional frequencies for new service.

Then the global credit crunch of 2008 and ensuing recession occurred and many of the frequencies were either left unused or simply never allocated as they became available through 2012.

"There's a lot of [US-China] frequencies out there and anybody who wants them can get them," a Delta spokesperson told Flightglobal in 2012.

What a difference three years makes.