ANALYSIS: Volotea bids to remain under the radar in LCC battle

Volotea may sponsor French Ligue 1 club FC Nantes, but chief executive Carlos Munoz believes the budget carrier is in a league of its own when it comes to its business model and its rivalry with the rest of Europe's low-cost carriers.

"We are in a different league, you could call it second division if you want – we don't feel particularly good or bad about it," Munoz told Flightglobal in Toulouse as the carrier took delivery of its first Airbus narrowbody on 9 March. "We are just happy that it's our own league."

Munoz explains that right from its inception in 2012, the Spanish-headquartered budget carrier has sought to avoid competing head-to-head with the likes of Ryanair, Vueling and EasyJet, instead preferring to focus on markets less interesting to those bigger rivals. He applies a paradoxical two-word descriptor to these markets: the "small, big" cities of Europe.

Munoz says that across 70% of Volotea's available seat-kilometres, there is no competition. "Not many airline chief executives can say that," he adds.

Overlap on its routes with other LCCs is "close to nonexistent", Munoz argues. Volotea will operate 186 routes this summer but compete with Ryanair on only three, with EasyJet on seven and with Vueling on six, he estimates. Where Volotea does compete with other airlines, they are the likes of Air France and Meridiana, against which where it has unit cost advantages, he adds.

Operating a fleet of 125-seat Boeing 717s, Volotea has carved out regional niches for itself across Spain, France and Italy, with bases at Nantes, Bordeaux, Venice, Asturias and elsewhere. The carrier intentionally avoids big city markets – such as London, Paris, Madrid and Barcelona – where competition with LCCs is fierce.

Flightglobal's Innovata schedules show that even in its main bases, Volotea remains a smaller player in comparison with other LCCs. At Nantes, it accounts for just 4.5% of seat share, well behind Hop and EasyJet. A similar picture emerges at Venice's Marco Polo airport, where the budget carrier comes in behind EasyJet and Alitalia, and at Bordeaux, where it trails Air France and EasyJet. 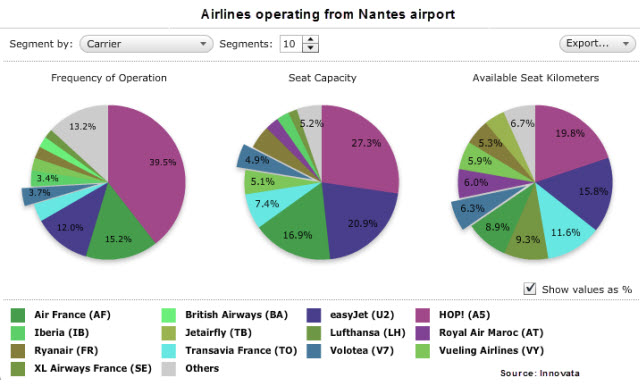 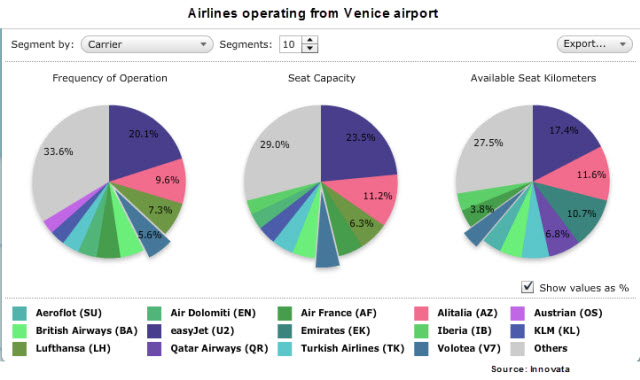 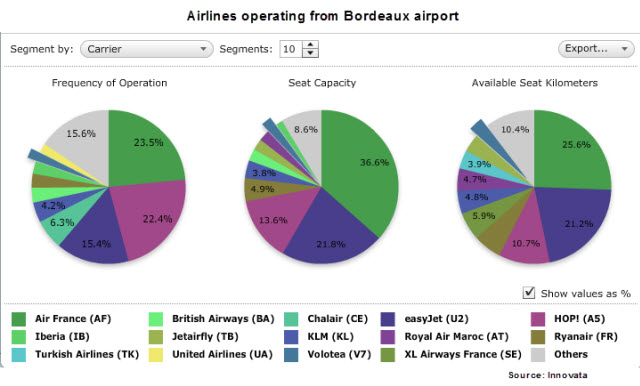 Perhaps this is an advantage for a carrier seeking to operate routes that would be undesirable for larger competitors.

Munoz says the carrier is mainly leisure-focused but does take much of the business traffic on the routes it operates, although corporate travellers are also just as likely to book their return trips with a competitor.

To understand Volotea's business model, it is helpful to consider Munoz's past career in the aviation industry. He was one of the founders of Vueling and its first chief executive with the remit of creating what he describes as the "EasyJet of the south, and nothing less than that".

Munoz still has fond memories of the company he credits with pioneering the low-cost model in southern Europe, but he is also candid in sharing his view that Vueling took the wrong path in merging with IAG in 2012. It is unlikely to be a coincidence this was the year in which Volotea was formed.

"My plan was not to have it [Vueling] as part of IAG," says Munoz. "I was very vocal because I was loyal to the institution, but I was not in favour of the merger and that delayed it for quite a while – but that's ancient history."

The impression Munoz gives is that Volotea is the airline he wanted Vueling to continue to be – independently run by a group of entrepreneurs backed by private equity. This he sees as a formula that "works quite well".

In founding Volotea with a team partly drawn from Vueling, Munoz planned to create a business that was truly low-cost at heart. "That's how we started, and how we have been growing and how we plan to keep growing – you never say forever – but for many, many years."

Now a new phase of development is beginning at the low-cost carrier. Volotea's decision to bring Airbus equipment into the fleet for the first time this year, with the arrival of four second-hand A319s is just the first phase of a complete refleeting plan. Over the coming two to three years, Munoz intends to phase out all of the carrier's 19 717s in favour of 30 to 40 leased A319s. 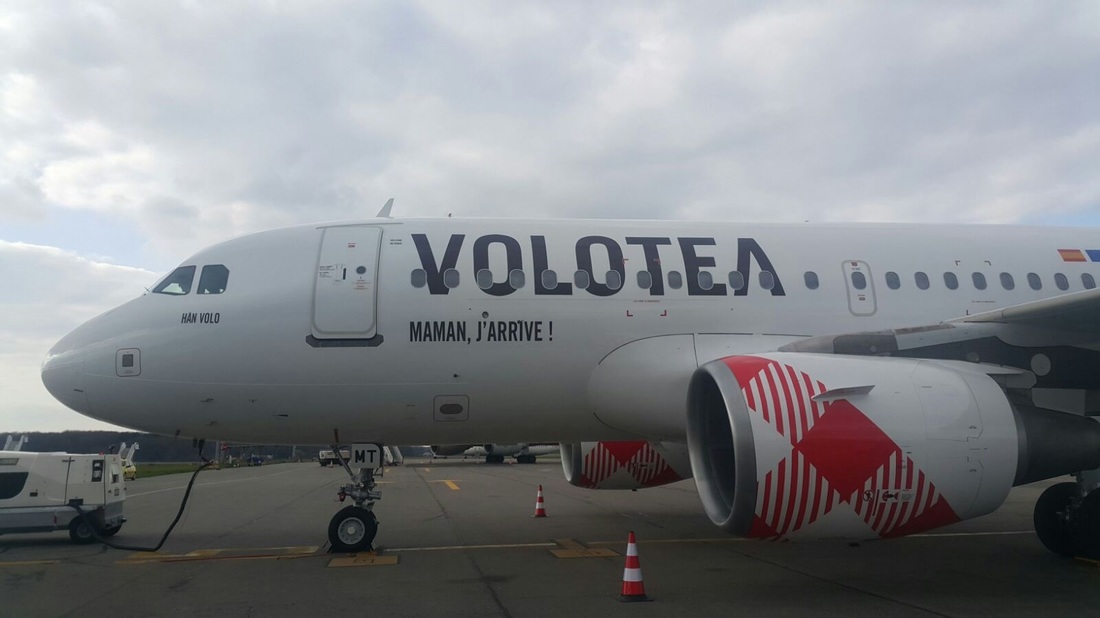 The motivation behind this move is Munoz's belief that the rest of the market is steadily upgauging, with Ryanair and EasyJet packing more seats into their narrowbodies. Munoz cites also EasyJet's preference for the A320.

As this occurs Volotea will move into the 150-seat market vacated by its rivals.

Munoz says Volotea has calculated the average seats of its competitors as follows: Ryanair at 189 seats, Vueling at 180 seats and EasyJet at 167 seats "more or less". As its rivals add more seat capacity, Volotea will keep pace by proportion of seats per aircraft as it moves from 125 seats to 150 seats, keeping the "delta difference" of approximately 50 seats unchanged, he says.

"A lot of our variable costs are driven by aircraft size and seat size," he acknowledges. "The beauty of it is that it's a very differentiated strategy... But it comes with challenges."

Munoz says Volotea will also seek to differentiate itself by sticking to its low-cost roots and not moving upmarket.

"EasyJet or Ryanair are moving upmarket to where Vueling was born from the beginning – Barcelona's main airport, new planes, seat assignments, classic distribution and all that," he says. "People have moved over to that because it does make sense."

Looking to future growth markets, Munoz says Volotea will probably "stick pretty much to the same geography that we have, country wise" with France, Italy, and Spain "to a smaller extent" getting the bulk of new capacity, but smaller markets such as Germany, Croatia, Greece, Portugal will also be considered. Munoz points out that Volotea will enter the UK market for the first time this year with a route from Majorca to Southampton.

He expects Volotea to continue to add one or two bases per annum as it has done over recent years.

To fund future growth, Volotea is seeking to float on the stock market in Madrid. Plans for this were revealed in January but the budget carrier quickly shelved them, citing volatility in the markets.

Munoz says he remains committed to an initial public offering once the market has the "appetite" for it and, while he says he has no clue as to when conditions will be right, he says he is unconcerned as the carrier is "in no rush" to make the move.

His enthusiasm for an IPO is in part motivated by his desire to avoid the fate of Vueling and having to merge with a larger player in order to grow.

"I didn't create Volotea to have any of my investors exit through selling to anybody else," he explains, adding that an IPO is the best method for allowing existing financiers to leave without opening the carrier up to a takeover bid.

Munoz says that he intends to remain a major shareholder in the company, stating: "I don't think create my companies to sell them to anybody – I do it to create leaders."

Money raised from an IPO would be used both for "general corporate purposes" – including growth and opening new bases – but would also to allow Volotea to extend its existing fuel-hedging strategy "further out", says Munoz. He notes that the airline already hedges 80% of its jet fuel 12 months ahead.

US-based CCMP Capital Partners has a 49% stake in the carrier; Axis and Corpfin Capital share 25%; and its two founders Munoz and Lazaro Ros hold the remaining 26%.

While its concern to avoid stepping on the big LCCs' toes has allowed Volotea to operate in a much less "competitive environment" than might otherwise have been the case, Munoz admits this approach comes with its own set of challenges.

"Our biggest challenge is our need to stimulate the market," he says. Volotea does this by adding routes that are not currently being operated, and in order to make them successful the carrier has to generate completely new traffic flows.

Munoz says that of the top 10 largest airports in France, the two that have enjoyed the fastest growth over the last three years – Bordeaux and Nantes – are Volotea bases, with the Barcelona-headquartered carrier accounting for between a third and half of this growth, Munoz says.

"Is it a coincidence or is it connected? It is hugely connected because they are new passengers... There is a huge effect of Volotea." But in the second year, "it goes down a bit", he acknowledges.

He admits also that Volotea has struggled with "huge seasonality" and has had to adapt its "whole structure as a company" to allow for this.

"We are much more seasonal than your normal airline, whether LCC or non-LCC around Europe, so we adapt all of our structure to that reality," he says. "You can do things to stimulate and we try that... Sometimes it works, but most times it does not."

The carrier averages a 76% load factor but he says there are "huge" peaks and troughs of seasonality.

Munoz looks for inspiration to US low-cost carrier Allegiant Air, which he describes as the "masters of high load". He says Volotea seeks to mimic the Las Vegas-based carrier's disciplined approach to parking aircraft when necessary.

Meanwhile, Munoz is hopeful that FC Nantes can move into fourth position in France's Ligue 1 with a few wins. After a victory on 13 March, they are sixth.