Eighteen months after it secured new owners in the form of Greybull Capital, UK leisure carrier Monarch Airlines is once again the subject of acquisition rumours, this time involving EasyJet.

Both carriers are being coy about their intentions, after UK weekly The Sunday Times yesterday reported EasyJet was weighing a takeover bid for Monarch. EasyJet is not commenting on the report, while Monarch notes that its continued success has generated "inbound interest", without identifying any suitors or how many are in pursuit. It adds: "Deutsche Bank is continuing to work with us to evaluate both inbound and outbound opportunities. The key focus of management and our shareholders, Greybull Capital, remains the successful development and growth of Monarch."

That potential outbound interest is underlined by a separate report in The Sunday Telegraph suggesting Monarch is eyeing up potential takeover targets of its own.

Loss-making Monarch was acquired by Greybull in October 2014 from the Swiss-Italian Mantegazza family for £125 million ($200 million), in a deal widely seen at the time as essential to ensure the survival of the carrier. The deal involved Greybull taking a 90% stake in the carrier and the remaining 10% being acquired by Monarch's defined pension provider.

Greybull's raison d'etre is to take on failing businesses, restructure them, and then sell them on at a profit, something it appears to be on track to achieving with Monarch.

Under the leadership of chief executive Andrew Swaffield the carrier has undertaken a restructuring programme under which it jettisoned the charter side of its business and removed its long-haul aircraft in order to focus on European short-haul leisure routes. That narrowed focus puts the business squarely in EasyJet's market.

Monarch Group is now forecasting an underlying full-year earnings total of more than £40 million ($60 million) in 2016. Having secured job cuts and new productivity targets as part of its takeover bid in 2014, Greybull has done a lot of the heavy lifting for any future owner and delivers a profitable business.

With its renewed focus, Monarch has moved to a slimmed-down single-aircraft fleet. With the airline having shed its Boeing 757s and Airbus A300s, Fightglobal's Fleets Analyzer database shows that it now operates a fleet of eight A320s which are 12 years old on average. The rest of its fleet consists of 25 A321s.

That provides some synergy with EasyJet, should interest from the carrier be confirmed. The latter is an all-Airbus operator. Its fleet comprises 143 A319s and 104 A320s, while it has 45 additional A320ceos and 130 A320neos on order, with the first Neos being delivered next year.

While EasyJet does not operate the A321, it might be interested in doing so. Flightglobal analysis suggests that over time there has been a steady upgauge in EasyJet's capacity at London Gatwick airport for example, with a much faster rise in A320 capacity compared with the A319's.

But EasyJet has been coy about its interest in the larger A321 variant. Speaking to Flightglobal at a media event in Paris on 14 April, chief executive Carolyn McCall said: "We have got loads of A320s. We have got even more A319s but we are obviously trying to get more A320s.

"We haven't really in the last six years taken any A319s into the fleet, [it is] all A320s and in the future our order is for A320s. So the Neos are all A320s, but of course they are part of the same family so if we wanted to get A321s we could do that." But McCall adds that the introduction of the A321 would be a "big jump" for the UK carrier in terms of filling seats.

On completing its purchase of Monarch, Greybull immediately firmed the carrier's planned fleet renewal. That would involve a switch to Boeing narrowbodies, as Monarch signed for 30 737 Max 8s and 15 options on the type.

Monarch is set to start taking the 737 Max aircraft in 2018 and to transition to an all-Boeing fleet by 2020. These slots could potentially carry some additional value, given that analysis by Flightglobal's consultancy Ascend suggests that the US manufacturer probably has less than 25 open Max slots to sell through 2020. But Ascend analysis of the Max backlog also indicates that operating lessors may have as many as 300 unplaced slots still to market in that timescale.

April data from Flightglobal's schedules specialist Innovata shows the biggest airports in capacity terms for the reshaped Monarch are Manchester, Gatwick and Birmingham.

Strengthening its position at Gatwick was one of the primary factors behind EasyJet's last acquisition, the 2008 purchase of GB Airways. In this instance, a tie-up with Monarch would not appear to have such a game-changing network impact, but it could supplement the carrier's activities at key airports. Easyjet has a strong presence at Manchester and Gatwick, where it is the second and biggest operator respectively. Monarch is the third-biggest operator at Birmingham, an airport at which EasyJet is the 10th largest.

Monarch also operates a 4% share of flights from EasyJet's long-established London Luton base – where both carriers are headquartered.

Flightglobal's Innovata schedules show that the two carriers compete in markets across Europe, but much of their rivalry is focused on routes from London's Luton and Gatwick airports and from Manchester to Spanish leisure markets.

Competition is particularly marked on routes from London to the Canary Islands, the southern coast of mainland Spain, and the Balearic Islands. There is also competition for cities in northern and southern Italy – such as Venice and Naples – as well as Israel, Cyprus and Hurghada in Egypt. 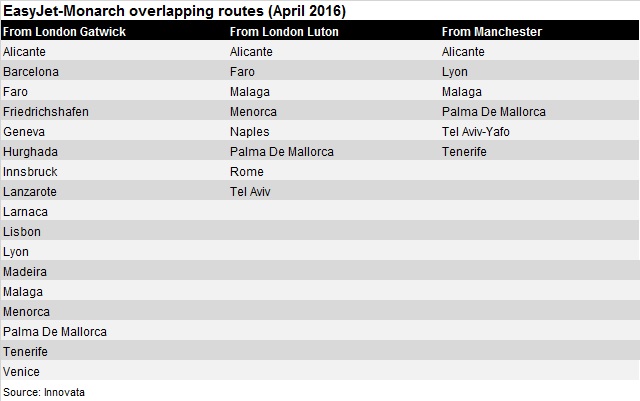