This article is based on a report prepared by Flightglobal's aircraft interiors specialist James Mellon, using data from Innovata and Fleets Analyzer. Download the data insight report here

The route between London and New York has been one of the busiest and most capacity-heavy international markets in the world. While there are other city pairs with a greater number of flights and seats, London-New York remains as important as ever.

That is underlined by continued market development under which the big network carrier services from either side of the Atlantic have been supplemented by services across the spectrum. That ranges from British Airways' Airbus A318-operated all-premium New York JFK service from London City airport, to, more recently, the introduction of flights from London Gatwick to JFK by low-cost carrier Norwegian. Competition for the latter will intensify next month when BA reinstates its own service from Gatwick to JFK using Boeing 777s, seven years after it last served the route.

US carriers American, Delta and United, while stopping short of a formal cabin, provide an extra-legroom package. This is based on the economy seat but providing greater seat pitch and possibly further recline. This is supplemented by the softer elements of the product – such as an increased baggage allowance, early boarding and free drinks – that can help differentiate it from standard economy.

But BA's transatlantic joint venture partner American will become the first US airline to introduce a dedicated premium economy cabin, debuting it on factory-fresh 787-9s from the fourth quarter of this year.

Data from Flightglobal's schedules specialist Innovata for the week of 4 April 2016 shows that BA holds the largest share of capacity – around 36% of more than 100,000 weekly seats – in the London-New York market. It also operates the most flights, 140 per week conducted with various types of widebody. 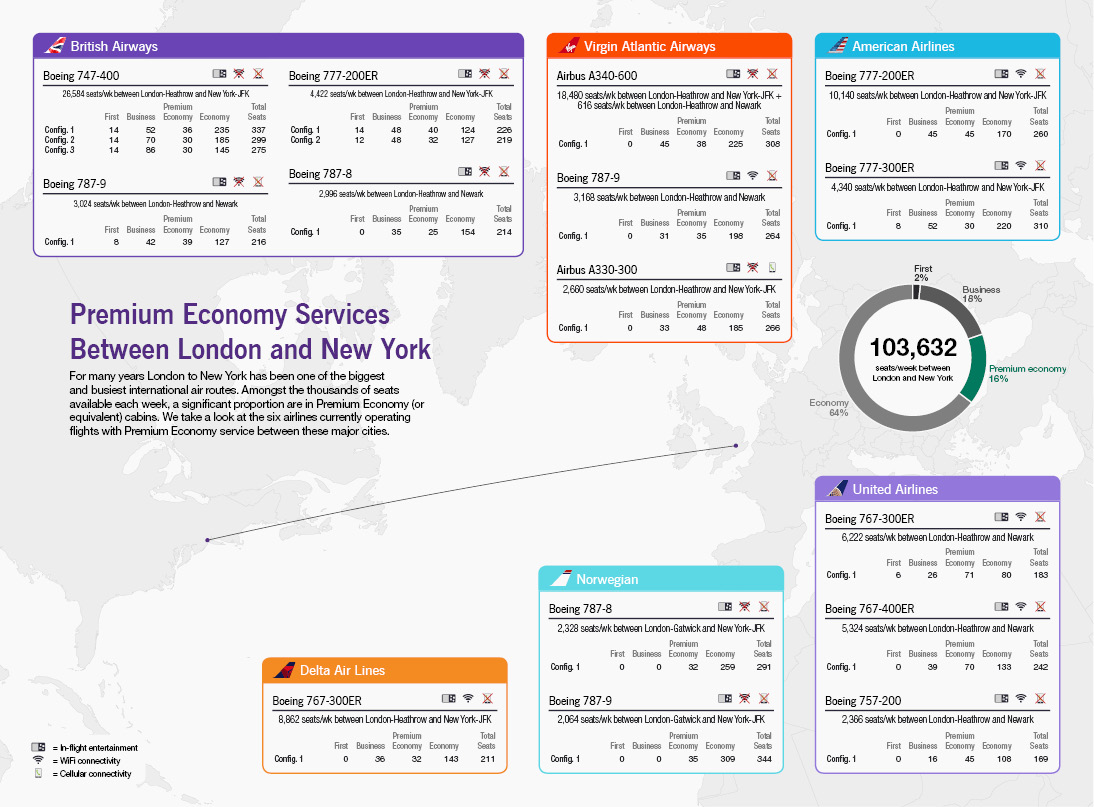 When broken down into capacity per cabin class, 16% are deemed to be premium economy seats almost matching the 18% of seats in business class. United Airlines provides more premium-economy segment seats than the other airlines with 4,584 per week, just marginally more than BA with 4,380.

The configuration of certain United aircraft have a higher proportion of premium economy seats than other airlines typically have. The 767-300ERs operating between London Heathrow and Newark have 71 Economy Plus seats, with 80 Economy seats further back in the cabin.

The varying approaches to the segment means there is no easy way to perfectly compare the different types of premium economy products available. One common theme is seat quantity. Numbers are generally kept low, between 30 and 50, resulting in small cabins that give passengers an exclusive space.

Seat pitches tend to range from the mid to high thirties, with seats typically five or six inches further apart than those in economy. The measurements of the seats on BA and Virgin Atlantic are identical across the various aircraft types operated, giving product consistency.

The configuration in terms of number of seats abreast can vary by airline. Common practice is for carriers to have one seat fewer abreast than in the economy section. This allows for wider seats – or at the very least, if the same type of seat as economy is used, ample room between them. Virgin's specially created seat is a roomy 21in wide.

The Norwegian premium seat is very different from the other airlines' products. The vital statistics put it in the bracket of a business seat, but the fact that it isn't a lie-flat makes it more akin to a business seat of yesteryear.

The IFE hardware available in a premium seat may not differ from that in economy, but will feature a seat-back screen with AVOD. In-seat power has become more of a necessity, especially for business travellers wishing to work during their journey. Almost all sample aircraft feature universal plug sockets, plus at least one USB port.

Not all of the airlines offer internet connectivity on transatlantic flights, but the number of airlines offering the service is increasing. Delta provides connectivity with 767-300ERs now equipped with Gogo's Ku-band service. United also offers consistent service having completed installation of eXConnect on all aircraft regularly serving transatlantic routes during summer 2015. The same Panasonic system is also employed by American on all 777-300ERs, and is gradually being installed on the 777-200ERs as the fleet undergoes an extensive cabin-refit programme.

Virgin Atlantic offers wi-fi but so far only on board its 787-9s. Other aircraft in the fleet are set to receive Gogo's new 2Ku system soon.

Although Norwegian has comprehensive wi-fi coverage across Europe, the 787s are still yet to be equipped. Meanwhile, BA has yet to commit to a connectivity provider altogether, having taken time to assess which system to adopt fleet-wide.

Get all the latest news and analysis from Aircraft Interiors here