What made you choose a career in aviation?

Aviation, and London Biggin Hill airport have always been the backdrop to my life. I grew up in the village of Biggin Hill and went to Charles Darwin School, which is just behind the hangars, at the end of the runway. I used to spend a lot of time during weekends and evenings at the airport to help out in the hangars. I left school in 1977, and came straight to the airport to find a job.

Tell us about your career so far

I started at Biggin Hill as an apprentice aircraft engineer. Five years later, I received what was then a basic airframe licence. I worked as an aircraft engineer and for a short period, as an assistant in the air traffic control tower. After some years at Gatwick airport, I returned to Biggin Hill for a short time and then went to work with Chapman Freeborn, one of the world’s leading aircraft charter companies. While I was there, the company won a tender to supply the aircraft that would carry the Olympic flame around the world from and to Athens for the 2004 Olympic Games.

They needed someone to set up and manage the operations, both in flight and on the ground at the various locations around the world, and I was lucky enough to be selected. I subsequently spent the year preceding the Olympic Games arranging the airport logistics in all 34 destinations that the flame would visit on its 45-day world tour. The role was extensive, including everything from VIP management to organising airport arrival and departure ceremonies and ensuring planes took off or landed at the correct times. During the 45-day tour I travelled with – or in many cases ahead of – the flame to ensure that everything ran smoothly. I’m happy to say that the flame made it to the Athens Olympics on time, without any major incidents. I came back to London Biggin Hill Airport in 2007, where I’ve been ground operations manager ever since. 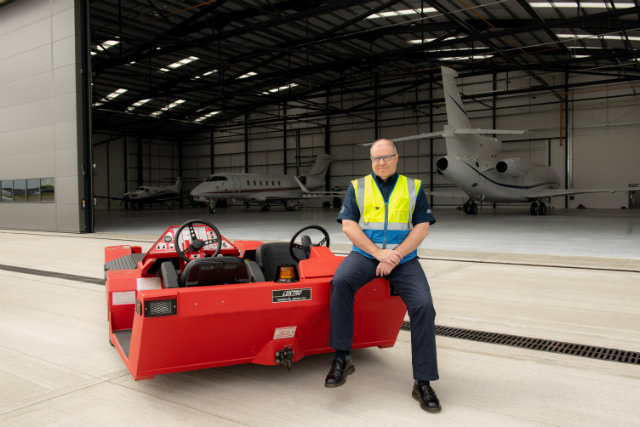 It's quite difficult to provide a structured job description, because my role blends into so many areas of the airport's daily operations. In a nutshell, I'm responsible for ensuring that there is a safe environment for all aircraft operations at the airport. This means being in constant contact with the ATC tower and operational and maintenance personnel around the airport, co-ordinating anything that needs to be done during or in between aircraft movements. I also manage the fuel department, help with customer-facing issues and manage passenger and crew security screening.

An ever-growing part of my job is implementing and monitoring regulations and airfield safety procedures and making sure we are compliant with European Aviation Safety Agency regulations.

What are your major challenges?

The increasing amount of regulation that has come into play recently, under EASA. More regulations mean significantly more paperwork, and I prefer to be out on the airfield. It is a massive challenge to manage and maintain the quality that customers expect while ensuring that we are compliant with constantly changing regulatory requirements.

What do you enjoy most about your work?

My role at Biggin Hill has evolved over the years as the airport has undergone immense growth. As a result, I enjoy the variety that comes with every new day. On a particularly busy day, I might find myself getting my hands dirty with the maintenance crew or holding up an umbrella for a customer stepping off an aircraft. It's important that the staff I work with know that I'm capable and willing to perform the tasks I ask of them. At the end of the day, it's about making sure the customer gets what they expect, no matter what is going on around their aircraft. I enjoy interacting with customers and have come to know many of the regular crews and operators over the years I've spent here.

One of my favourite roles is managing the ground operations during air shows. I’ve been involved with every air show at the airport since the 1979 International Air Fair. Even when I was working elsewhere, I made sure that I was available to return and manage the shows. It has since changed its name to the Biggin Hill Festival of Flight, but is still one of the most exciting celebrations of aviation in the UK.

What are your hobbies or interests?

I’m also a qualified flying display director, which has come in handy for the many international air shows I work at. In fact, I wrote the coursework for the qualification – so you could call that a hobby. Outside the Festival of Flight, I’ve been invited to manage flight and ground operations at events in the UAE, Saudi Arabia and many others in the UK, including Farnborough International air show. I also ran a helicopter terminal at Silverstone for the British Grand Prix for five years.