Australia has further refined the search area for a missing Malaysia Airlines Boeing 777-200ER following a major review of data around the ill-fated MH370 flight that went missing over the southern Indian Ocean on 8 March 2014.

In an update on the definition of the underwater search areas for MH370, the Australian Transport Safety Bureau (ATSB) says that the Defence Science and Technology Group (DTSG) has conducted a major review of the data available about the flight to model its likely path and refine the search area.

DTSG was able to build a model of the final flight based on the available data, which was calibrated using satellite data and flight data from previous 777 flights. It also conducted 60 validation experiments to ensure that predictions aligned with real-world flight data. 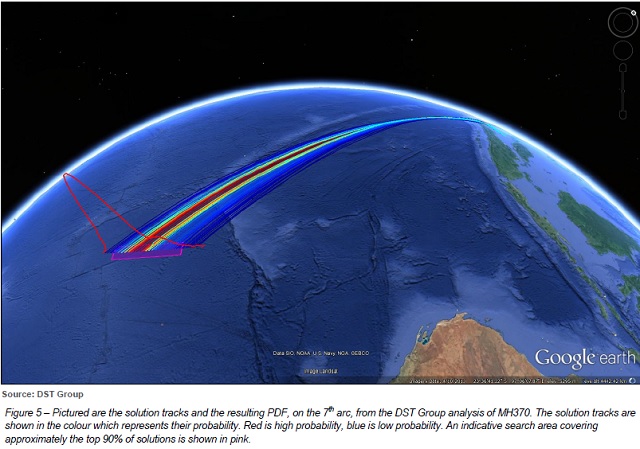 Applying a probability theory developed in the 18th century by Thomas Bayes, DSTG defined the probable final location of the 777 as along a 700km section the ‘seventh arc’ in the southern Indian Ocean, most likely 20nm either side of the arc. 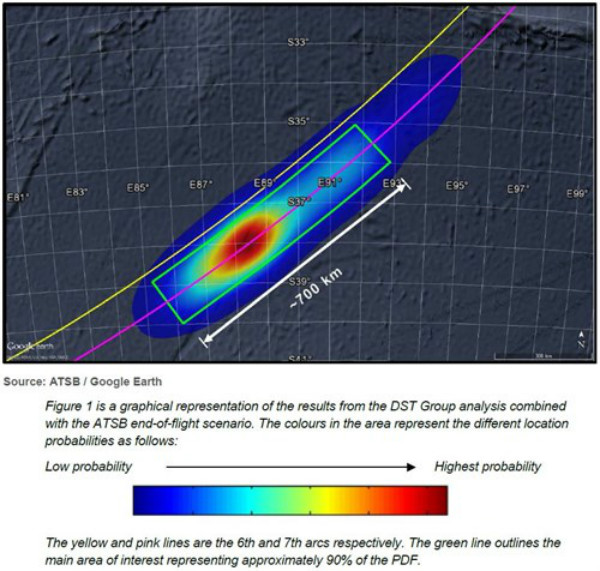 “The original ATSB underwater search area definition report published in August 2014 identified a width of 20nm behind the arc and 30nm forward of the arc as the priority search area width,” says the ATSB. “This primary priority width has been adjusted to make it symmetrical about the arc (20nm on both sides). The ATSB has also defined and prioritised additional search area widths.”

The latest update also contained further details on the likely sequence of events as the aircraft came towards the end of its flight, based on separate analyses by DTSG and Boeing that were “in general agreement.”

Based on the recorded fuel loads, it is likely that the 777’s right hand engine flamed out from fuel starvation prior to the final successful attempt by the satellite communications terminal to log-on to the Inmarsat constellation, from which the sixth arc was derived.

The left engine, however, may have continued to run for up to 15 minutes afterwards before also flaming out, which would have resulted in the ram air turbine deploying and the auxiliary power unit auto-start sequence commencing. 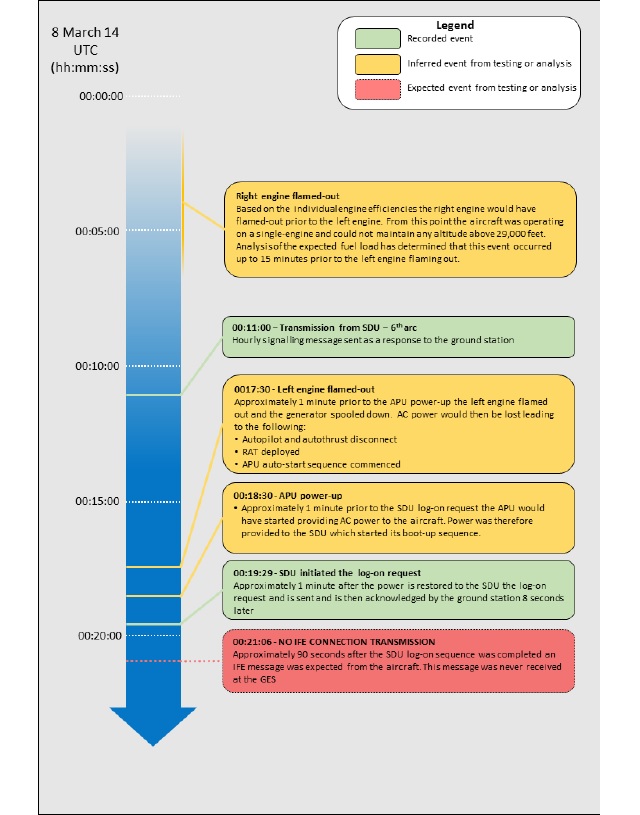 Approximately two minutes after those events, the final incomplete satcom log-on request was sent, and acknowledged by a ground station shortly thereafter.

The ATSB says that, based on the modelling of the aircraft’s electrical systems, the evidence is “inconsistent with a controlled ditching scenario.”

The 777, registered as 9M-MRO, went missing during a flight from Kuala Lumpur to Beijing with 227 passengers and 12 crew on board. Earlier this year, part of a flaperon that washed up near Reunion Island was confirmed to have come from the aircraft, but no other traces of the missing jet have been recovered since.