Several years after losing interest in the Northrop Grumman MQ-8 Fire Scout, the US Army is again searching for a “long-range, runway-independent” UAV that can launch anywhere, anytime.

The potential opportunity has Bell Helicopter looking at old tiltrotor designs for inspiration, namely the Eagle Eye UAV that first flew in 1998 and was later developed for extended maritime surveillance from US Coast Guard ships.

The prototype crashed in 2006, but Bell’s VP of advance tiltrotor systems Vince Tobin insists the design was sound – there just wasn’t enough interest or money to keep the programme going.

“But there’s significant customer interest now,” he tells Flightglobal. “I do think a tiltrotor UAV solution is plausible, if not likely.” 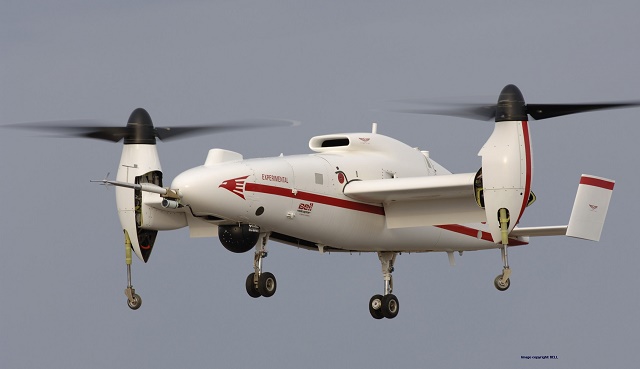 Bell Eagle Eye in 2006. Could an updated version make a triumphant comeback?

The army says it wants a mid-sized, next-generation unmanned system that is armed and survivable – but mostly, one that isn’t dependent on landing strips hours away from the battlefield.

Speaking at an army aviation forum in Washington DC last week, officials said they want something with vertical takeoff and landing (VTOL) capabilities, but does that mean a rotorcraft?

Army Training and Doctrine Command UAS capabilities manager Col Paul Cravey clarified that point in an October interview, saying the army is interested in the full range of possibilities for achieve runway independence.

“If VTOL is the word of the day, then yes. But we don’t want to restrict it to VTOL or a helicopter,” the colonel says. “We want industry to respond with whatever solution they might have.”

He says it could be similar to the Bell-Boeing V-22 Osprey, with a transition from hover to forward flight, or something entirely different. It must operate in poor weather conditions, and through electromagnetic disruption where GPS signals and communications links are “denied”.

The army hasn’t said if it would accept UAVs that are launched and recovered, like the Lockheed Martin Fury or Northrop Bat. But perhaps they’re thinking of something similar to the DARPA and Office of Naval Research tactically exploited reconnaissance node (TERN) programme, which recently moved forward with Northrop’s flying wing VTOL design. 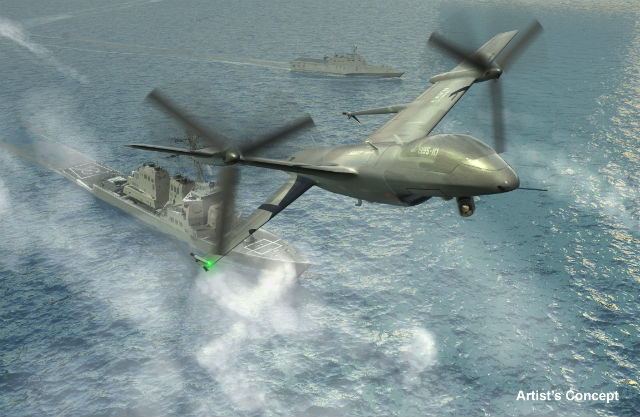 One of two air vehicle concepts considered for the DARPA TERN programme.

Cravey says at the aviation forum that signature reduction is important, and it must be controllable from a portable “universal cockpit” or inside an army joint light tactical vehicle (JLTV).

“[The UAV] can’t be sitting in an airfield that’s four hours away from where the command post is," says army aviation centre of excellence head Maj Gen Michael Lundy. “We’ve got to get off airfields.”

A programme time line or request for proposals has not been released, but details could surface in next month’s fiscal year 2017 budget release.