A Israeli Aircraft Industries / Belgian Hunter Consortium B-Hunter UAV has reportedly crashed this afternoon killing one woman and injuring two others in the Congolese capital city of Kinshasa.

Details of the accident are still emerging.

The reported loss is the second experienced by the Belgian Defence Force in the Democratic Republic of Congo since deploying B-Hunter to that country in July as part of the European peace keeping force (EUFOR) Congo.

A B-Hunter was shot down near Kinshasa’s N’Dolo airport on 28 July by a lone gunman near the end of a shakedown flight.

A replacement for that UAV was deployed in early August. The Belgian Defence Force air component announced 7 September that the detachment, comprising four UAVs, had achieved 30 missions totalling more than 100 flying hours by that date. 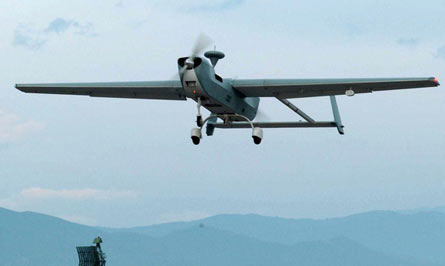