Gust lock left on before Jetstream excursion at Munster

German investigators have determined that a British Aerospace Jetstream 32 did not have a modification intended to prevent inadvertent take-off with engaged gust locks before it suffered a damaging excursion during departure from Munster.

According to cockpit-voice recorder information the crew – while preparing to line up on runway 25 – overlooked a checklist item to ensure the flight controls had full freedom of movement, says German investigation authority BFU.

During the take-off roll the aircraft’s captain handed control at 70kt to the first officer, who attempted to rotate at 108kt. The first officer remarked that he could not pull the control column, and the crew was also unable to counter a drift to the right with the rudder pedals.

Although the take-off was aborted at 130kt, efforts to use the nose-wheel steering to maintain directional control were unable to prevent the aircraft from exiting the runway after 1,080m. It travelled for 530m along rough ground, up to 23m from the paved edge, before being steered back onto the runway.

The captain immediately informed the tower that the gust lock was still engaged.

None of the four occupants was injured during the event, which occurred on 8 October. While the inquiry has not identified the operator, it says the aircraft involved was MSN848 which Cirium fleets data lists as an AIS Airlines aircraft. 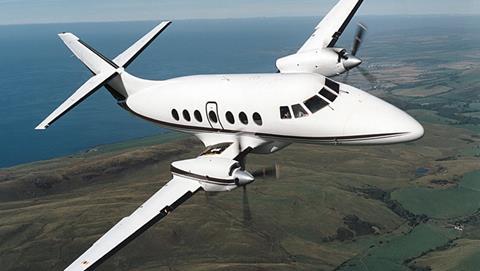 BFU says the pilots should not have been able to move both power levers out of flight-idle while the gust lock was engaged, but the stop mechanism was damaged. A modification developed to reinforce this mechanism, implemented as standard from MSN937, had not been retrofitted to the aircraft.

The inquiry says the aircraft sustained propeller blade and tyre damage, as well as damage to part of its baggage hold, while fuel leaks were discovered in the area where the main landing-gear is attached to the wing structure.

BFU found differences between the airline’s and the aircraft manufacturer’s checklists, including no independent item for unlocking the gust locks.

Although the gust lock would normally have been released before the first flight of the day – the aircraft had already completed two sorties – the airline had said it was “common practice” to engage the locks while taxiing to prevent the flight controls from moving.