Pilatus predicts a bumpy 2020 but sees ‘clean landing’ ahead

Pilatus expects 2020 to be a turbulent year as the coronavirus pandemic threatens to hit output of its PC-24 and PC-12NGX, but the airframer is confident the business can successfully “navigate” the crisis and remain robust, thanks to its “strong product line”, healthy military trainer backlog and ample financial reserves.

In its 2019 annual report, published on 15 May, the Stans, Switzerland-based airframer says it began this year with a substantial order backlog valued at over Swfr2 billion ($2.1 billion). But due to the coronavirus outbreak, the “promising outlook” of the early weeks of 2020 has had to be revised downwards. 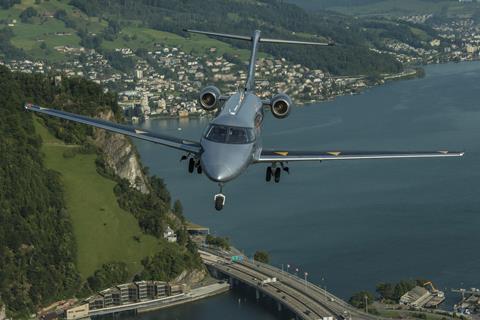 The company says that it was “quick to take appropriate countermeasures” when the virus hit, including the introduction of reduced work patterns for large numbers of staff.  Today, “fewer than 20% of employees are still affected by this measure”, says Pilatus. However, supply chains remain disrupted, “necessitating continuous reassessment of the situation”, it adds.

Pilatus says “2019 will go down in the company’s 80-year history as another very successful 12 months”. Key milestones during the period included the launch in October of the PC-12NGX - the third iteration of the 26-year-old single-engined turboprop. The aircraft features a number of enhancements over its NG predecessor, including a Pratt & Whitney Canada PT6E-67XP engine, which features an electronic propeller- and engine-control system, a revamped cockpit with digital autothrottle, and a redesigned cabin with a choice of BMW Designworks interiors and larger windows.

In May, Pilatus re-opened the orderbook for the PC-24, to take advantage of pent-up demand for the superlight jet. The initial batch of 84 aircraft sold out within 36h of the orderbook opening in May 2014.

Pilatus says it has delivered 75 of the all-metal type since the first example was handed over in early 2018, and interest in the aircraft “remains as high as ever”.

It notes however, that “teething problems” with the PC-24 have “taken longer-than-expected to eliminate, and this has impacted negatively on results”.

“Together with our suppliers, who also have a contribution to make, our goal is to ensure that the PC-24 offers customers the same outstanding level of reliability as all our other aircraft,” says Pilatus.

The firm also last year saw the selection by Spain of 24 PC-21s for its air force. The contract was officially signed in January and shipments of the turboprop trainer are scheduled to begin in 2021.

Pilatus describes this military aircraft order as “a very important step in securing future operations”, should the more volatile business and general aviation market be “heavily impacted by the current economic difficulties”.

The PC-21 contract “will prove essential for Pilatus in terms of providing sufficient activity for the workforce and continued business success for the company”, Pilatus adds.

“It also demonstrates the importance of the two-pillar strategy – civilian and military business – in guaranteeing future economic viability.”

Pilatus chairman Oscar Schwenk says he is “very pleased” with Pilatus’s performance in 2019. 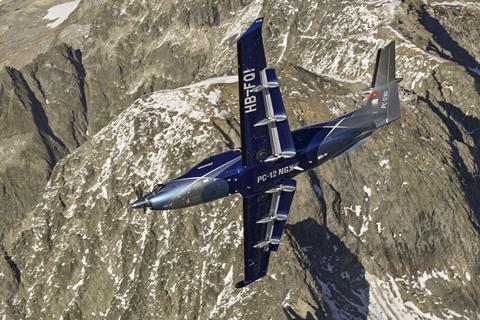 He cautions, however, “that the corona[virus] pandemic has pitched us – and many others – into a period of severe turbulence requiring constant fact-based readjustment of our chosen heading.”

Continuing with the piloting metaphor, Schwenk says: “Every pilot learns how to make the all-important corrections to flightpath and altitude. We are… reverting to the basics, as taught from the first hours of flight instruction – encompassed in the term ’good airmanship’: aviate, navigate, communicate.”

He says Pilatus’s finances are robust thanks to its long-established strategy “to economise during the good times”, in preparation for future ”challenges” to the business.

“In a situation which no-one could have foreseen, it is reassuring to know that the financial reserves set aside in the past will ensure we are able to navigate the current crisis in preparation for a clean landing and a renewed take-off into the future, together,” says Schwenk.