UK start-up Samad Aerospace is preparing a 50% scale model of its e-Starling hybrid-electric vertical take-off and landing (eVTOL) aircraft for flight testing in early September, the next major milestone in the development of the six-seat composite air taxi, which is scheduled for certification and service entry in 2025.

The first of two models is now being assembled at Samad’s base in Cranfield and ground testing will begin in early September. “The ground testing is a very important process, and will involve different checks to make sure all aircraft systems and subsystems are working properly both individually and as a whole,” says Samad founder and chief executive Seyed Mohseni. 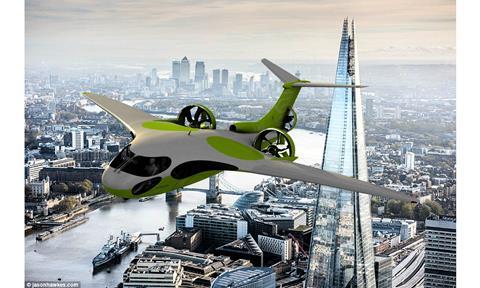 Six-seat e-Starling is scheduled for service entry in 2025

Flight testing will start in the second half of the month with evaluations initially focused on conventional take-off and landing procedures. VTOL testing will begin in November with the second 50% scale prototype. “We are taking a step-by-step approach to the e-Starling certification programme to make sure the aircraft operates perfectly as both a fixed-wing aircraft and a rotorcraft. Once we fully understand both elements of the flight-test process it will have a better chance of trouble free certification programme.”

Data from the tests will be fed into the full-scale e-Starling with Samad aiming to complete preliminary design of the aircraft in 2021, and detailed design the following year. “We will build and fly the first of three e-Starling prototypes in 2023 and hope to certificate [under the European Union Aviation Safety Agency’s new eVTOL regulations] in 2024, Mohseni adds. The first examples are scheduled for delivery in 2025.

Samad is considering Garmin for the aircraft’s avionics, while the gas turbine generator will be provided by either GE Aviation, Honeywell, Safran or Pratt & Whitney Canada, he adds.

The six-seat e-Starling will be propelled by five electric-powered fans: two on the trailing edge of the wing thrusting vertically, two units embedded in the aircraft’s blended wing body, which are only used during vertical flight. One fixed fan coupled with a range extender is located in the tail “providing the necessary thrust to take the aircraft beyond stall speed and transition from hover to cruise for shorter journeys”, says Mohseni.

Priced at $6.5 million, the e-Starling is targeted at air taxi, corporate, VIP and air ambulance operators. “The aircraft will create a new opportunity for quick, clean, energy-efficient transport with zero emissions in urban areas,” says Mohseni.

Samad is seeking around £125 million ($165 million) to bring the e-Starling to market which it hopes to raise through a mix of private investment, UK government funding and capital from its in-development Q-Starling, Mohseni says this two-seat luxury, hybrid-evtol aircraft will enter its preliminary design phase in September, and begin flight-testing in 2021. “We aim to certificate and deliver the first Q-Starlings in 2022 which each sale providing capital for the e-Starling programme,” says Mohseni. “As the Q-Starling will be used for private flying, the certification process will be quicker and simpler that its larger stablemate which is being developed for a commercial application.”

Priced at $2 million, the hybrid-electric aircraft uses a single central contra rotating lift fan, while the cruise fans - embedded in the empennage - are totally independent with no tilting mechanism, says Mohseni. “There are small control fans on tip of the wings, nose and empennage to control the orientation during the hover,” he adds.

Described by Samad as “a jump-jet for the jet-set”, the Q-Starling will have a range of over 400nm and a cruise speed of 250kt.

Development of Samad’s 10-seat Starling Jet “is two years behind the e-Starling” says Mohseni. “The aircraft is in the concept design phase and we are now seeking to define the market opportunities for this model before we embark on a £500,000,000 development programme,” he adds.