The Nigerian air force has described how its limited rotary capability has proven detrimental in its fight against Boko Haram insurgents that have been advancing throughout the country.

The force has operated Mil Mi-24V and Mi-35P attack helicopters since 2000, but increased terrorist activity in recent years has demonstrated the limited capability of the aircraft, AVM AA Zannah, chief of policy and plans for the nation’s air force, told the Defence IQ International Military Helicopter conference in London on 21 January.

“Our modest efforts against terrorism and counter-insurgency have their challenges,” Zannah says of Nigeria’s self-named Operation Restore Order/Zaman Lafiya. “Our problems have been multiplied. For various reasons we had to deploy to lots of different places. It remained practically impossible to deploy to all.”

The air force’s rotorcraft are largely based in the south of the country, but militants advancing from Chad to the east and north of Nigeria pose a problem due to the logistical burden of transporting the helicopters to these areas.

The air force is in the process of establishing six forward operating bases near the conflicted areas, so rotorcraft are more readily available to deal with any situations and “can respond slightly faster”.

Nigeria also operates AgustaWestland’s AW109 utility helicopter – which the air force plans to weaponise and fit with cameras – although Zannah claims that in the current political climate, it has “an inadequate” number of helicopters. 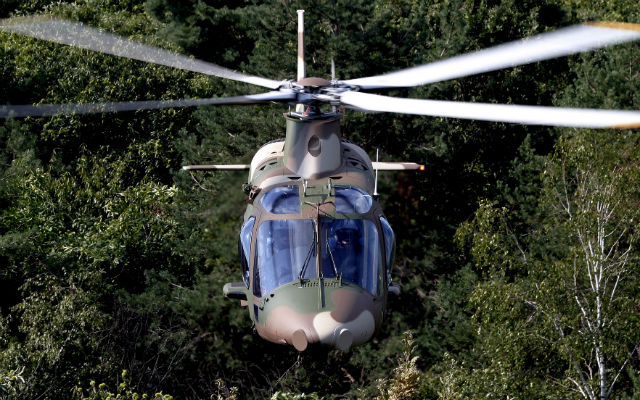 Mil’s Mi-17 transport helicopter is also in service, but the air force is looking to acquire a number of upgraded Mi-171SH variants – although Zannah did not go into detail about the number the air force has in mind.

“Most of our aircraft were acquired in a basic configuration, which is a real problem for us” Zannah says.

He adds that when the air force only had to deal with “stone-throwing criminals”, a simple fly-by was enough to control the situation. However, Boko Haram has rocket-propelled grenades and other weapons that can impact the survivability of an aircraft.

A lack of spares is also a challenge, and potential obsolescence a concern, so the air force occasionally relies on moving parts from one aircraft to another.

An increasing number of operations has also put pressure on personnel: “Manpower is an issue – when we had fewer tasks to accomplish we had enough,” Zannah says.

The air force lost two Mi-24 “Hind” helicopters and four crew members in recent years due to incidents on board – such as fire – that the crew were not able to deal with. Zannah adds that crew spend too much time “trying to stay alive” when carrying out operations due to the basic configuration of the rotorcraft, which “affects mission accomplishment”.

The Nigerian air force previously attempted to acquire the Bell Helicopter AH-1 Cobra through an undisclosed Israeli company, but the purchase was vetoed.

“For us the retention of a formidable helicopter force is no longer a debate,” Zannah says. “Terrorism may be with us for the next year, or even beyond.

“We’re doing our best and we have our challenges, but if we don’t nip this [insurgency] in the bud it will spill over.”