The Turret Research in Aero-Effects (STRAFE) programme, which examines laser beam control, is the first of three contracts that will be awarded under AFRL’s fighter jet demonstration known as the Self-Protect High Energy Laser Demonstrator (SHiELD). The service will award two separate contracts for the Laser Pod Research and Development, which will develop the pod, thermal management system, battery and cooling system, and the Laser Advancement for Next-Generation Compact Environments (LANCE), which seeks an electric laser source that could fit on both fifth- and sixth-generation aircraft.

The USAF wants to demonstrate a high power, solid state laser on a fighter by 2021, according to the August contract award. AFRL will begin the preliminary and critical design review of Northrop’s proposal within the next two months, SHiELD programme manager Richard Bagnell tellsFlightGlobal.

Northrop will develop the beam control system under the award, but the high power laser source will be procured under the LANCE contract. The company will use a low power laser for their demonstration, Bagnell says.

AFRL expects to brief industry on the laser source in early 2017 and is evaluating the pod integration. The beam control system and laser ride in the pod, which also provides the power and cooling for the laser, protecting the laser from the harsh outside environment, Bagnell says.

Northrop’s work will focus on assembling the set of optics that the laser feeds through, he says. The system resembles a telescope which rides in a gimbal that can pivot in any direction to shoot the laser. Beam control is a critical component for the laser fighter jet programme, which must overcome extreme turbulence caused by an air stream flowing around the aircraft. That disturbance can affect the laser’s accuracy as the beam travels toward the target, he says. While AFRL, Lockheed Martin and the Defense Advanced Research Projects Agency already demonstrated a beam control turret capability on a Dassault Falcon 10 business jet in 2014, the USAF still faces a significant challenge shrinking the laser weapon system to fit a fighter-sized platform.

“Part of [Northrop’s] job is to send the beam out to the target and be able to correct it so that if there’s turbulence between you and the target, that you can hit as high a power density as possible on the target to be effective,” he says. 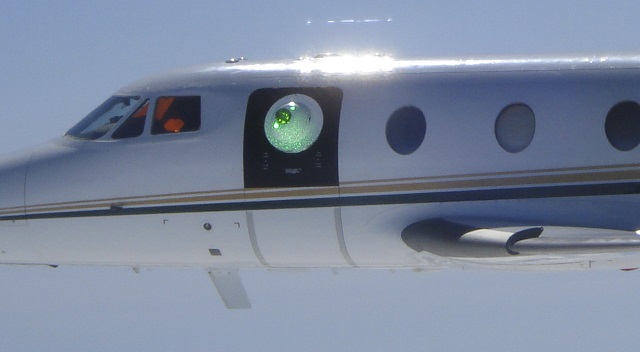 Although there are plans to field the field the laser on the Lockheed Martin F-35A, AFRL is not building the pod for stealth capability for the current demonstration.

“It will show that it is effective against the target that we’re going after and then once we’re happy with that, then there might be a redesign for the stealth part of it,” Bagnell says. “We want to make sure the laser weapon system operates as we expect it to before we invest in taking the next step.”

The USAF expects the pod to conform to standard air force configuration, which could be based on external fuel tanks that fit on fighters today. By the time LPRD is awarded, AFRL will have developed a laser pod concept that includes the overall capacity to fit the laser, cooling and beam control system, Bagnell says. AFRL would not elaborate on the type of fighter the laboratory may select, but Bagnell says most fighters they are considering could handle the size, weight, power and cooling parameters.

“We’re expecting the pod will be standalone as far as power and cooling are required so that all we’ll need is communications from the laser into the cockpit in order for us to control it to make sure we have a positive control laser,” he says.