Northrop Grumman has won a landmark victory in the strike aircraft market, beating Boeing for a $635 million contract to prove the viability of a carrier-based, unmanned bomber.

The US Navy announced on 1 August that it had selected Northrop's X-47B over the Boeing X-45N, a derivative of the land-based X-45C.

The aircraft will be used to demonstrate that an unmanned aircraft in a tailless configuration with a low-observable planform can land on a carrier deck and prove non-disruptive in deck operations with manned aircraft.

The Unmanned Combat Air Systems Technology Demonstrator (UCAS-D) has a six-year timeline, with the first carrier landing of the X-47B scheduled for 2011. 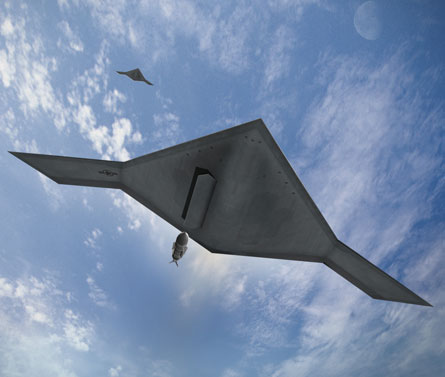 The navy's budget documents show that the total programme cost is estimated to be $1.5 billion. It was not immediately clear why less than half that amount was put under contract last week.

Navy officials will use the demonstration to inform a decision on acquiring a fleet of such aircraft to perform a long-range strike role that has been missing from carrier decks since the retirement of the Grumman A-6E Intruder in the early 1990s. That decision is to be made after 2013

Northrop's victory re-establishes the company as a player in the carrier-based strike aircraft market. The X-47 family, which includes the X-47A Pegasus, was invented for the sole purpose of launching from navy carriers and has a long history with the naval aviation community.

"The UCAS-D award is the culmination of an eight-year effort with the navy to show the benefit of melding the capabilities of a survivable, persistent, long-range UCAS with those of a CVN-21-class aircraft carrier," said Gary Ervin, vice-president for Northrop Grumman's Integrated Systems Western Region sector.

Boeing's loss could have a severe impact on that company's long-term presence in the strike aircraft market. With no new development contracts to follow the F/A-18E/F and F-15E production programmes, Boeing must find new work to keep engineering and production know-how within the company until the next opportunity arises.

Boeing is not entirely removed from new developments with carrier-based strike aircraft. The company has a contract with the navy to continue demonstrating flight control software for unmanned carrier operations with F/A-18s.