The Boeing 787 battery involved in the Japan Airlines incident on 7 January reveal signs of a short-circuit in one cell and thermal runaway that led to a fire, says the US National Transportation Safety Board.

The NTSB's first press conference 16 days after the JAL battery failure and fire in Boston also revealed that the investigation could still be far from discovering a root cause.

"It is really hard to tell how long the investigation will take," says Deborah Hersman, NTSB chairwoman.

"We have to understand why this battery resulted in a fire when there is so many protections designed into this system," she adds.

The short circuit was found in cell five of the eight-cell, 32V battery that starts the auxiliary power unit and is located in the aft electronic equipment bay in the 787.

But the NTSB has not yet been able to narrow down a set of possible root causes that it is ready to reveal to the public.

"We are seeing symptoms," she says. "We know there is something wrong here. The short circuit, the fire, these are all symptoms that something is wrong." 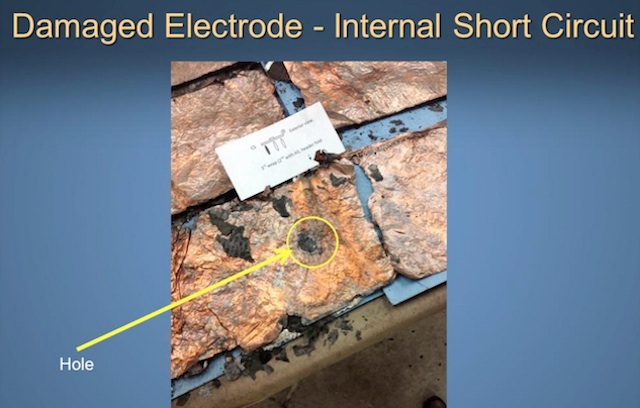 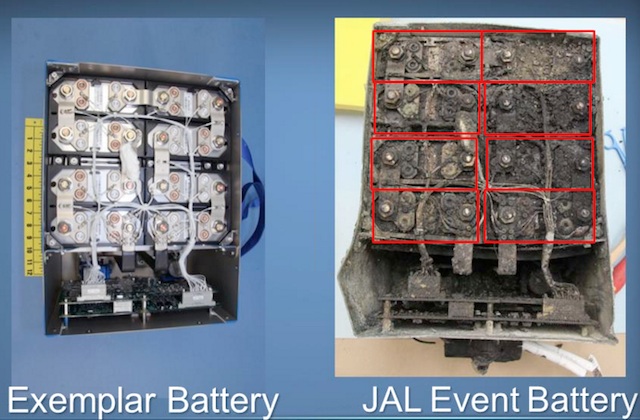 Hersman says a troubling complication of both the JAL 787 incident and the All Nippon Airways 787 battery event was the timing of the battery failures within 100 flight hours of service by both aircraft.

"We do not expect to see events like what we saw on the 787 in the battery system," Hersman says. "Two battery events in two weeks in the early flights of this aircraft are not what we expect."

The incidents prompted the FAA to order United Airlines to ground all six US-registered 787s on 16 January, an action that triggered a global grounding of the aircraft less than 15 months after it entered service with ANA in October 2011.

So far, the Japan Transport Safety Board and the NTSB have agreed that there is no evidence yet that either battery was over-charged when it failed, but they are continuing to examine the data. Hersman says, for example, that investigators are still considering if it was possible for one of the eight battery cells was over-charged, but not the overall battery.

Another critical part of the investigation is considering the certification process for the 787 batteries.

"These events should not happen as far as design of the airplane," Hersman says. "There are multiple systems to prevent a battery event like this. Those systems did not work. We need to understand why."