As years go, 2018 was about as good as it gets when casting a historical eye at the various trials and tribulations which have affected - and at times afflicted - the Lockheed Martin F-35 over the past decade or so.

First Israel, then the US Marine Corps used the fifth-generation type in anger for the first time, striking ground targets in the Middle East. Then, as the year drew to a close, Italy and the UK each declared reaching initial operational capability with the fighter. A protracted, 11-year system development and demonstration phase was at last wrapped up, and successful landing trials were also conducted aboard the Royal Navy aircraft carrier HMS Queen Elizabeth.

Potential order boosts were hinted at by existing recipients Japan and the Netherlands, and Belgium also opted to advance discussions to buy the A-model jet as a successor for its long-serving Lockheed F-16s. All good news for a programme which will stand or fall on the volume and longevity of its production run.

There were of course setbacks, including a brief suspension of deliveries to the US Air Force amid a dispute over corrosion repair costs, a first-ever crash, involving a USMC F-35B, and the heating up of a simmering spat with Turkey over Ankara's parallel procurement of the Lightning II and Russian-made surface-to-air missile systems. Still to be resolved, this issue could impact Washington's plans to deliver an eventual 100 new aircraft to its NATO ally.

Meanwhile, a record 91 deliveries were also made, from Fort Worth in Texas and national final assembly and check-out lines in Italy and Japan: an impressive rise from the 66 examples transferred in 2018 and 46 the year before. Unit prices also continued to fall, as promised. 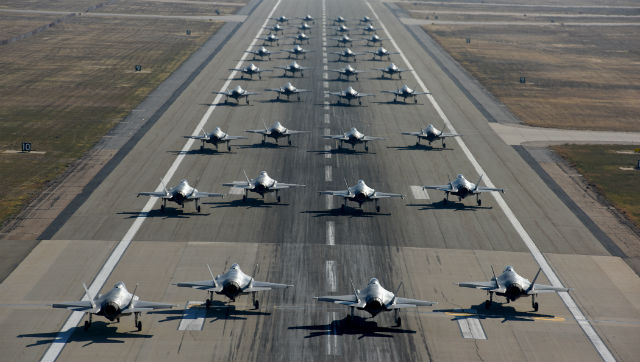 The challenge now facing Lockheed is to repeat this achievement as output jumps by a further 40%, to at least 130 aircraft during 2019.

After eight years of production deliveries, the coming 12 months will provide the sternest test yet for Lockheed, its manufacturing partners BAE Systems and Northrop Grumman, and countless other companies throughout its sprawling supply chain for the Lightning II. Success should keep the programme on a path to delivering an $80 million F-35A from 2020, but any fresh turbulence could deter additional prospective buyers, and offer encouragement to rival producers such as Boeing, Dassault, Eurofighter and Saab.

Outside the three US services, which our data shows have a combined 264 F-35s in active use, nine other nations have now taken delivery of the type, boosting the global inventory beyond 350. While the Lightning II has at times polarised opinion and perhaps still has more than its fair share of detractors, it is rapidly growing in not only capability, but also operational relevance to the countries which have invested so heavily in it.

Lockheed's ability to keep the programme on target has never been more important.