OPINION: Can Faury fly as Enders' successor at Airbus?

Guillaume Faury – named as successor to Airbus chief executive Tom Enders – has big paratrooper boots to fill. The former military man has achieved during six years as head of Europe’s aerospace behemoth what many believed could never happen. He brought a squabbling alliance of political and industrial egos under a single management, brand, and headquarters.

Airbus today is unrecognisable from EADS (even the name was unwieldy) – the turn-of-the-century project to unite the aerospace industries of France and Germany in a marriage of convenience to take on the might of Boeing in commercial aviation, and bring much of the nations’ military industrial firepower under one organisation. Enders must take much of the credit for that.

The German will formally hand over in April, but during his time in charge he has overseen much more than an organisational shake-up.

The decision to re-engine the A320 as the Neo saved billions of dollars in developing a new narrowbody family, and forced Boeing to follow suit with its 737 Max. The successful introduction of the A350 has ensured Airbus remains a contender in the widebody segment after the A380’s failure. A painful rationalisation of the defence and space businesses also has secured Airbus’s future in these markets.

There have been less auspicious moments. Bringing to production the A400M military transport has been a costly and convoluted exercise. The A380 and A330neo have failed to impress. And Enders’ dream of an even bigger European consolidation – a merger with BAE Systems – was shot down by wary politicians.

Aside from the problematic programmes, he bequeaths Faury (centre, below) a number of other challenges, not all of his making. He will depart just as the UK – which Airbus likes to call its fourth home country – leaves the EU, potentially creating a supply-chain tangle in the event of a no-deal Brexit: a prospect Enders describes as a “catastrophe”. 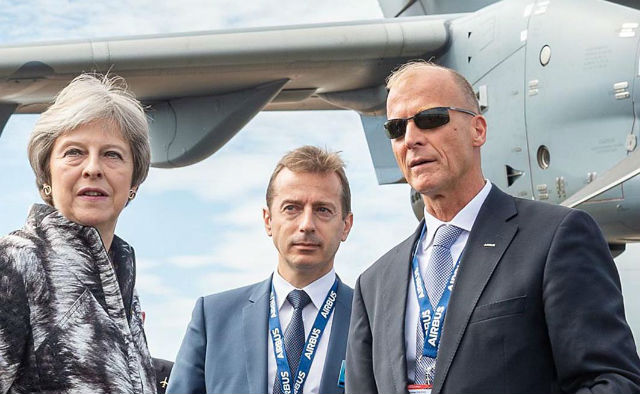 Airbus – that we know of – has no direct answer to Boeing’s proposed New Mid-market Airplane, bar the long-legged A321LR, and the indifferent reaction to the A330neo could leave its US rival with three strong families in the long-haul market against Airbus’s one.

The company’s commercial arm is still getting over the retirement of long-serving super-salesman John Leahy and the resignation of former chief executive Fabrice Brégier, who former Airbus Helicopters chief Faury replaced.

Outside commercial aviation, helicopter sales globally are down and, while the logic of constrained defence budgets might demand a consolidation of Europe’s military aerospace industries, there seems to be little political appetite for Toulouse to swallow the likes of BAE, Dassault, Leonardo or Saab.

Faury has had a rapid ascent. Still running research and development for the then-Eurocopter as Enders was taking the controls at Airbus commercial a decade ago, the Frenchman was promoted from the helicopter division only earlier this year. He has six months of preparation to take on the biggest job of his life.