No sector of the aerospace industry is in more turmoil than the regional jet market.

Within weeks or months, the Bombardier CSeries will likely become an Airbus-owned property. Embraer’s E-Jet family, including the second-generation E2, could be absorbed into Boeing.

That leaves new entrants, such as Mitsubishi Aircraft, with its MRJ, in a precarious position. 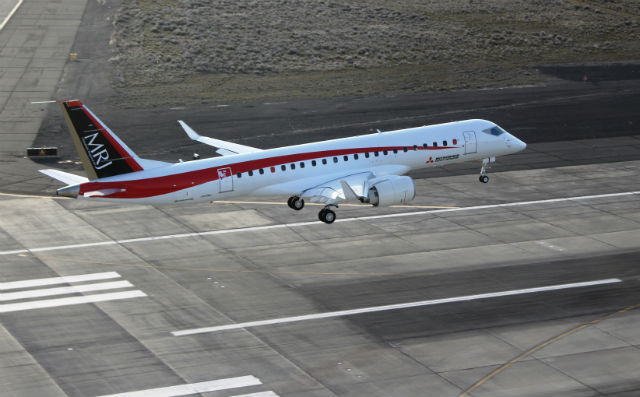 Mitsubishi Heavy Industries is no corporate lightweight, but does that Nagoya boardroom have the financial and industrial muscle to take on Boeing in a head-to-head competition for regional jet orders? That story is yet to unfold, but Mitsubishi’s options are limited.

Five delays in development have pushed entry into service for the MRJ90 back by six years, and two US regional carriers that account for 70% of the backlog have no place for the aircraft in their fleets without the increasingly distant prospect of scope clause relief.

The recent production go-ahead for the smaller MRJ70 may provide a solution, as it sits below the weight threshold for the scope clause limit. But that strategy will only work if airlines accept a cabin that can accommodate up to seven fewer passengers than the maximum of 76 seats permitted.

The Mitsubishi Regional Jet may have a troubled origin story, but it is still a significant one. It was the MRJ90 that launched the Pratt & Whitney geared turbofan engine family. The MRJ70 is the smallest airliner with fly-by-wire controls. Both aircraft represent Japanese industry’s most impressive attempt to enter the passenger market since the ill-fated YS-11 in the 1980s.

Japan is not the only entity with something at stake in the success of the MRJ. In a market that has been unable to support a successful new entrant since the creation of Embraer almost 50 years ago, the entire industry benefits if a viable new competitor can survive.

Mitsubishi Aircraft now seems to be getting its act together. A fifth schedule delay announced in January 2017 finally seemed to wake the company to the strong possibility of failure. In the last 17 months, it has launched a sweeping re-organisation, completed an urgent redesign of the MRJ90’s wiring and avionics and continued to make progress in flight testing.

The odds against a new entrant in the regional jet market have never seemed higher. Mitsubishi Aircraft’s early mistakes made its position even harder. But the company is clearly responding. It knows what is at stake – and it is not just the MRJ.