OPINION: Does US Air Force need a Loyal Wingman?

Think of contemporary military might, and in all likelihood a list would rank the USA as flying way clear of any rival power. And rightly so – our World Air Forces analysis for 2018 shows that Washington holds a 25% share of the global fleet: impressive, even before considering that this is just shy of double the combined arsenals of China and Russia.

But the USA’s long era of assured air superiority is increasingly coming under threat, as a result of a proliferation of advanced air-defence systems and the emergence of stealthy fighters developed by Beijing and Moscow.

A study undertaken by the Mitchell Institute shows that the US Air Force’s fighter and attack aircraft fleet dwindled from more than 9,300 just after the Korean War to just under 2,000 two years ago. 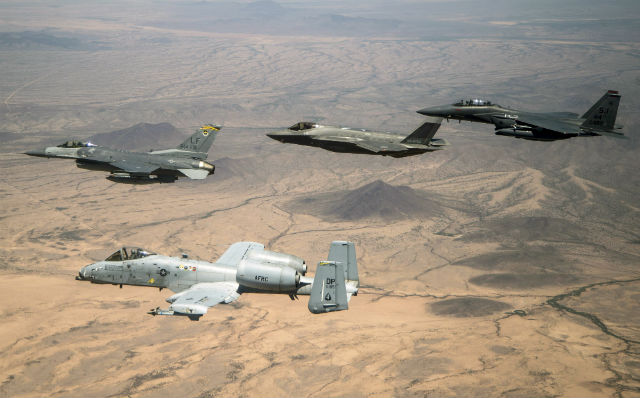 Contributing factors included the end of the Cold War and the service’s focus on fielding hugely capable, but ever-more expensive stealth platforms, such as the Lockheed Martin F-22 and Northrop Grumman B-2. That trend continues with Lockheed’s new F-35.

Alarmingly for the Pentagon, analysis conducted by the Rand Corporation concludes that once projected against four future operational scenarios, including heightened tensions with China or Russia, the USAF’s mighty inventory would fall short in all instances: both in capacity and capability.

Lacking the budget to simply buy many more of its most sophisticated aircraft to address such a shortfall, the service is now exploring other means of addressing operational limitations. These range from acquiring a large fleet of turboprop-powered, light strike aircraft as a cheaper alternative to using more advanced types in benign conditions, to introducing a so-called Loyal Wingman capability. Envisaged as a semi-autonomous unmanned air vehicle flying alongside a traditional fighter, and potentially in significant numbers, this would prove adept at taking on the “dull, dirty and dangerous” duties too difficult or risky for a human pilot to consider.

Current UAVs lack the handling performance and survivability to perform such tasks, but start-ups such as Kratos Defense & Security Solutions and Sierra Technical Services could potentially supply a Loyal Wingman for a fraction of the price of an F-35.

Pilots want to fly the most capable – and expensive – aircraft that the defence industry can produce. But as the USAF is coming to appreciate more acutely these days, quantity also has a quality of its own.