OPINION: How Laker beat a path for today's long-haul low-costs

If Freddie Laker is looking down on the airline industry, one can only imagine that he has a wry smile on his face. The launch, 40 years ago, of his Skytrain service represented the first exchanges in the low-fare “battle of the Atlantic”, a sector becoming an increasingly popular playground for budget airlines and legacy carriers alike.

That first Skytrain service to New York took off from London Gatwick on 26 September 1977. It was the fruits of Laker’s five-year campaign on both sides of the Atlantic to win approval to break the monopoly of US and European flag carriers in the market. Until that breakthrough by the flamboyant Laker (below), the Atlantic market was effectively a cartel strictly controlled by IATA, whose members agreed the fare levels. 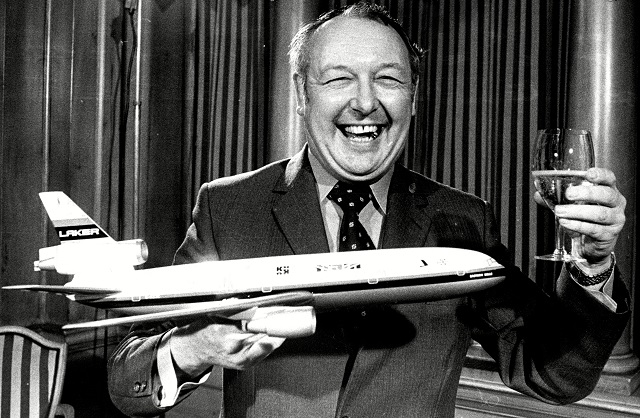 The only transatlantic budget option available was a bizarre arrangement which permitted airlines to operate charter flights as long as their passengers had at least six months’ membership of an “affinity group” whose main purpose was not travel.

Laker rather unflatteringly referred to the alliance of regulators, agencies and governments that held all the cards as “bums and gangsters”.

As often is the case with successful innovators, Laker was not actually the first aviation entrepreneur to identify the huge untapped opportunity in low-fare travel. Back in the 1950s, Harold Bamberg – who ran Laker’s contemporary independent airline British Eagle – pointed out that the air-travel market for wealthy and business travellers had been fully exploited and that “the answer is to reduce the cost of air transport… If fares were reduced, many more people would travel.”

But it was Freddie who took on the establishment to untangle the red tape and break up the monopolies. And his vision was straightforward. In those days before the advent of multichannel distribution and online bookings, he realised that simplicity – and good marketing – was all he needed. “What we want is something simple like a train,” he said.

And like on a train, if you wanted to eat or drink during the journey then you brought your own – or bought on board.

And so the “Skytrain” concept was born – a simple no-booking, walk-up transatlantic service. The DC-10 operating that first service left Gatwick with 272 passengers on board, each having paid £59. The big trijet returned with every one of its 345 seats occupied, as Laker revealed that walk-on services to Australia were his next priority.

The Laker low-cost revolution lasted only five years, as his airline fell victim to a combination of ambitious expansion amid the early 1980s recession and questionable moves by the airline establishment to put him out of business. The airline ceased in February 1982 and although Laker never did realise his Australian ambitions, thanks to Skytrain the low-cost long-haul genie was out of the bottle.

Emirates boss Tim Clark, who was in the British Caledonian planning department at Gatwick in the early 1970s, had a ringside seat for Laker’s Skytrain fight. This early lesson in the power of pricing no doubt played into his thinking as Clark shaped the Emirates strategy to similarly take on the industry establishment.

But with its growing transatlantic network, Norwegian is the true spiritual successor to Skytrain. Like Laker, it has forced the legacies to respond. Air France low-cost unit Boost will launch later this year, while IAG has created its Barcelona-based budget operation Level. Oh, the irony – IAG unit British Airways fought Laker every step of the way and was one of “the six” airlines that allegedly conspired to stop Skytrain in its tracks.

“Clearly we studied [Norwegian] and tried to learn from them,” IAG strategy chief Robert Boyle told FlightGlobal recently. The same could be said of Skytrain’s established rivals four decades ago – as Laker found to his cost.

The question is, will the Norwegian story end the way of Laker’s, with it being forced out (or acquired)? Time will tell – but even if does there will be plenty more long-haul disruptors coming along behind.