OPINION: Should Italian Typhoons be targeting more than exports?

With the four-nation Eurofighter consortium in a number of dogfights which it hopes will result in fresh export deals to extend production of the type into the next decade, the ability to demonstrate its new “swing-role” performance can surely only serve to strengthen its competitive hand.

According to a much-used military maxim, it is of great importance for an air force to train how it fights. So does the fact that some of the Typhoons which Rome sent to participate in a recent Red Flag-series exercise releasing precision-guided bombs, indicate that it also intends to use the combination in anger? 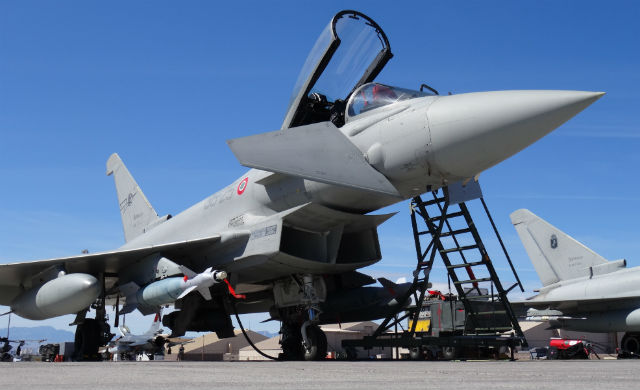 Not so, the Italian air force says. Unlike its partner nation the UK, the service remains determined in its opinion that the Typhoon should first and foremost be an air-defence asset, using its ground-attack skills only under unique circumstances. Dropping weapons at the combat training event was aimed more at proving such capabilities to potential international buyers, it adds.

There are, of course, other interpretations. Italy is unusual among European NATO nations in the diverse structure of its air combat fleet. The Alenia Aermacchi AMX and Panavia Tornado already perform air-to-surface roles, and it also has the Lockheed Martin F-35 to come.

Shouting too much about the Typhoon’s capabilities could threaten its air force’s platform balance. But if it whispers, export customers might not take notice.