With the unveiling on 13 September in St Louis of the Boeing/Saab trainer, the four-way competition to claim the $10 billion contract to replace the US Air Force’s Northrop T-38C Talon fleet is now set. 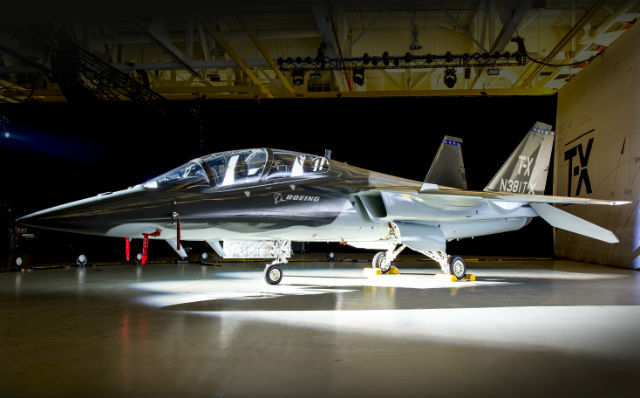 For a change, a military aircraft customer will enjoy a diverse range of competitive options. The Boeing/Saab team and Northrop Grumman are offering new designs purposely crafted for the T-X requirements. Lockheed Martin/Korea Aerospace Industries (KAI) and the Raytheon/Leonardo teams are proposing bids based on mature aircraft designs with operational pedigrees.

The air force will also enjoy a split of lower- and higher-thrust options, with the Boeing/Saab and Lockheed/KAI offerings featuring roughly 50% more engine power than the Northrop and Raytheon/Leonardo bids.

At stake is not only the platform that will train several generations of air force pilots heading into the cockpits of the Northrop B-21, Lockheed F-35 and F-22, along with other combat and airlift aircraft.

The T-X competition also has the potential to reshape the industrial landscape. A loss by the Boeing/Saab team effectively stakes the future of the legacy McDonnell production complex in St Louis on continued demand for F-15s and F/A-18E/Fs.

A win for the Boeing, Lockheed or Raytheon bids also would help globalise the US industrial base, reversing a trend that has favoured the use of solely home-grown technology.

Moreover, the promised 350-aircraft production run for the air force alone will make the T-X winner the global standard for advanced jet trainers.

With so much riding on the outcome, the air force must be extremely careful. Recent history suggests such a hotly contested bidding process invites sharp legal scrutiny. For years, a series of industry protests blocked the air force’s attempts to acquire a new tanker and combat search and rescue helicopter. In the latter case, it escaped legal challenge only by forgoing a competition and simply awarding the contract to Sikorsky.

Even if the USAF dodges legal obstacles, a gauntlet of budgetary challenges remain. It is already struggling to protect funding for its three highest priorities – the F-35A, B-21 and Boeing KC-46 – as they enter a ramp-up phase. Meanwhile, Congress is challenging the service’s budget-saving proposals to retire certain types, leaving little financial headroom if a future T-X funding gap emerges.

In a budgetary dogfight between bombers, fighters and trainers, the latter is always at a disadvantage.