OPINION: The fading dream of an A380 secondary market

The spectre of the first Airbus A380s being unceremoniously scrapped has now become a reality, following the news that the owner of some grounded ex-Singapore Airlines aircraft has failed to secure new leases.

These aircraft, which are only a decade old, are part of a batch being returned off lease by SIA (pictured below) as it rolls over a portion of its A380 fleet through the introduction of brand-new units. The owner, Dr Peters Group, has been seeking new operators for the pair without success and bluntly describes the decision to part out the aircraft as “the only solution we have”. 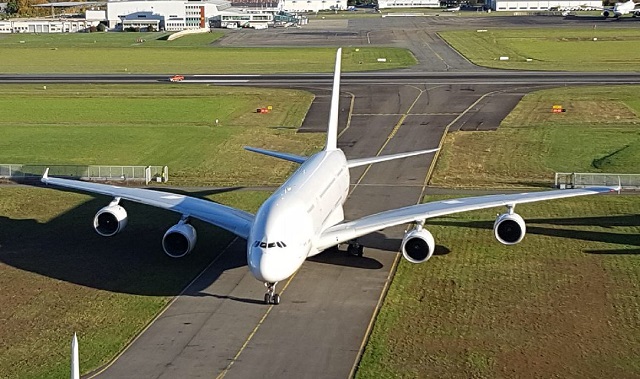 Dr Peters adds that parting out the first units of a new aircraft series “carries a very attractive return”. Selling each shipset of Rolls-Royce Trent 900 engines should on its own accrue a total of up to $33 million.

Is this a fate that awaits all superjumbos as their careers come to an end with their first operators? Not necessarily – but the prospect of a solid secondary market has just receded.

There are, however, specific circumstances that led to the early termination of these particular aircraft. They were among the first off the line back in 2006-2007 and were caught up in the production woes that blighted the programme’s early days.

These aircraft – in many ways pre-production units – had to undergo significant rework on the line due to the wiring issues caused by a “disconnect” in the design process between Airbus divisions. Such was the scale of modification required that they have been occasionally described as “hand-built”.

Given Airbus’s learning curve on the design and development of the A380, the first units delivered could cruelly be labelled “lead sleds”. In other words, they lack the appeal of later aircraft that were built to a higher production standard, with weight savings and operational improvements yielding better performance.

But where the secondary market is concerned, there is an elephant in the room for all A380s, regardless of age or line number. And that is the question of whether there is a viable business case to perform the reconfiguration – likely to be expensive – of the two cabin decks in order to meet the needs of a new customer.

Such is the cost that even a current operator may baulk at the undertaking. This may have played into the decision by SIA to return some of its early examples as it carries out a fleet-wide cabin upgrade, instead replacing them with new aircraft featuring the updated interior.

Portuguese wet-lease operator Hi Fly, which is aiming to lease up to two other ex-SIA A380s, has indicated that it will retain the original cabin configuration. Whether this solution is scalable for potential operators of other second-hand A380s is uncertain – and frankly improbable.

But the central problem that owners of second-hand A380s face when attempting to find new homes is one all too familiar to the Airbus sales team: the market for the very-large jet – be it new or second-hand – remains in a deep slumber. The A380 is undoubtedly a marketing triumph – passengers love it – but Airbus has so far been unable to convert that into mass-market sales success. The rest of the programme’s problems are secondary.