The UK's record in protecting the safety of the public at air shows is impressive. Despite more than a dozen major public displays every year, the Shoreham disaster is the first time in almost half a century that, at a British air show, spectators or people in the airfield vicinity have died as a result of an aircraft crash.

The most notorious incident was in 1952 when a prototype of the De Havilland 110 fighter broke up in mid air at the Farnborough air show, the wreckage killing 29 spectators. The resulting rules and guidelines for air display management developed by the UK Civil Aviation Authority over the years since then have been adopted worldwide as an example of best practice.

Since the Farnborough tragedy, three people on the ground died in an accident in 1958 and one in an incident 10 years later, but, since then, no bystanders are thought to have been killed at a UK air show.

This is not to say air show flying displays in recent years have been free of incident or tragedy. There have been frequent crashes where the display pilot has died and, in fact, this is the third air show accident this year in the UK. However, the risk to air show spectators and those in the vicinity of the aerodrome has always been regarded as extremely low. 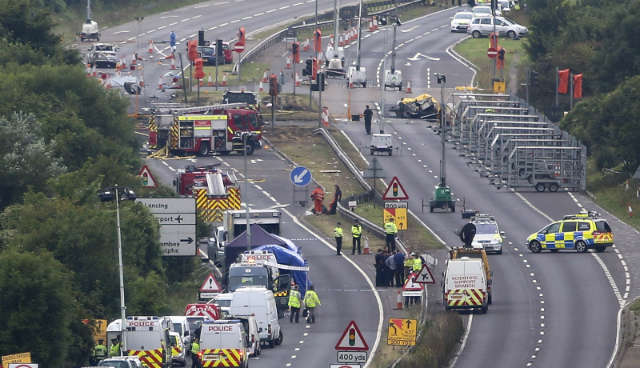 Our report on preparations for the most recent Farnborough in 2014 provides an example of the exacting discipline that goes into air show planning, and also the real-time control once the display routine starts. Under the air show's own rules - stricter than the CAA's own regulations - display aviators are presented with 76 pages of instructions and restrictions, and in real time, their airborne antics are monitored by a committee armed with an electro-optic tracker. The duty flying display director has direct radio access to the pilots and the authority to order them to abandon their display and land immediately at any time, although he does not actually provide air traffic control during the display – the tower visual control room does that.

The same level of discipline, embodied in CAA regulations for the conduct of air displays, is applied at other shows, but display routines are adapted for local factors like terrain, nearby restricted airspace, urban areas and airfield layout. The objective is not only to protect those attending the air show, but also those living and working nearby. There are on-airfield territorial designators, like the display datum, the display line, manoeuvre line, crowd line and aerodrome boundary, all of them dictated by the orientation of the runway in front of the crowd, which is designated as the axis of the aircraft displays. No manoeuvre is allowed to cross the display line in the direction of the spectator line.

The 22 August crash at the Brighton City Airport has, however, called into question whether existing controls on air show safety are sufficient, and precautionary measures have already been published, with the CAA grounding all Hawker Hunters until the investigation reveals the cause of its crash, and suspending the permission for all vintage jets to perform “high energy aerobatics” at air shows until more is known.

In this accident the Hunter T7 entered its display via a fast, low approach from the north-east along the extended display line that parallels the hard runway 02/20. Over the airfield it began a graceful pull-up into a steep climb, rolled left during the pull-up to alter the orientation of the trajectory’s progress through the inverted, and began the descent in a long arc that ended up heading westerly. The descent continued until impact with the busy, dual-carriageway main road that runs east-west close to the end of runway 20, killing at least 11 people on the ground.