Having never before experienced a “super-cycle” in the commercial aviation business, it’s not always clear what one should look like while we are inside it, particularly after a perplexing announcement, such as a mass staff reduction by Boeing’s commercial unit amidst an historic production ramp-up.

Despite Boeing Commercial Airplanes’ decision to cut its headcount nearly 5% by mid-year, the present market super-cycle is real. Following a succession of discredited market scares, like order bubbles, financing shortages and early retirements, Airbus and Boeing still maintain seemingly absurd order backlogs, even as production output is at an all-time high: and climbing.

Some in the industry appear to have a harder time coping with all this success. Lower-tier suppliers with single-source products on commercial aircraft have gained the most in value; hence Berkshire Hathaway’s $37 billion acquisition of Precision Castparts last year.

Boeing’s workforce predicament remains puzzling. The manufacturer plans to ramp up overall production by 30% over the next four years, even when factoring in scheduled rate reductions for the 747 and 777. It also has no shortage of development work, such as getting the 737 Max, 787-10 and 777-9 into service. 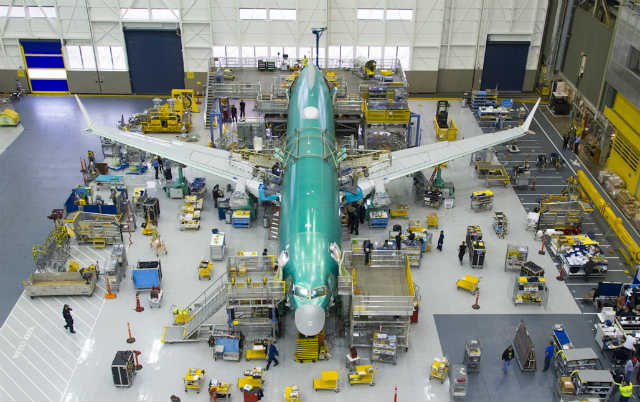 But other statistics suggest Boeing still has room to shrink. Consider that it employed 93,000 workers and built 492 commercial jets in 2000. Fifteen years later, following a large-scale shift to lean manufacturing and significant outsourcing, it still needed 82,000 workers to deliver 762 airliners. It plans to deliver even more aircraft this year with 78,000 staff, but that total is still significantly more than the 55,000 Airbus workers who delivered 629 aircraft last year.

Boeing has made no secret of a need to reduce costs at its commercial division, and has famously goaded suppliers to lower double-digit profit margins through reducing prices or accepting more volume. It has taken inefficiently outsourced work back in-house, and re-tooled final assembly lines to make them even leaner and more flexible and productive.

It is clearly still feeling cost pressures as it considers the business case for a so-called Middle of the Market concept and a long-term replacement for the 737 Max.

The super-cycle can be read as a market distortion fuelled by the availability of cheap oil and low interest rates, although the oil price has reversed course in the past year. Boeing’s workforce reduction at a time of production ramp-up will not be the only perplexing move as the business boom continues.