Go-arounds are considered an unexceptional part of day-to-day airline operations, to the point where tabloids treating them as newsworthy dramas can expect to attract a measure of scorn.

But such manoeuvres are not common as far as individual crews are concerned: a French study three years ago estimated that long-haul crews would carry out just one every five to 10 years.

That research concentrated on aircraft state awareness and discovered that crews involved in botched go-arounds were often no longer aware of the basic parameters – in particular the fundamental trinity of pitch, thrust and speed.

While the investigation into the Emirates Boeing 777 accident at Dubai is still active, the preliminary findings have already strongly signalled that one of these three critical parameters, thrust, was overlooked. 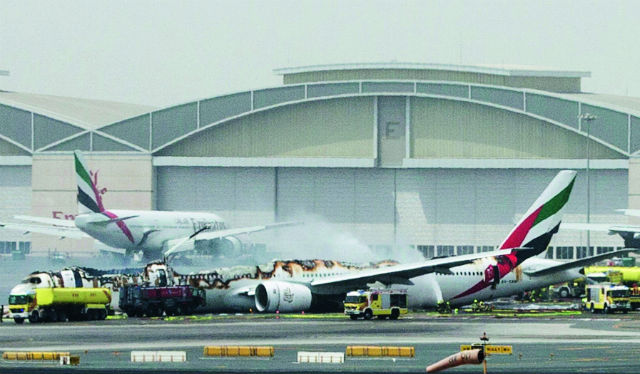 Just 10s elapsed between the sounding of a cockpit alarm, which appears to have triggered the aborted landing, and the retraction of the undercarriage.

Those events would have book-ended a short period of intense mental activity as the crew suddenly shifted out of an end-of-flight mindset to assess the alert, commit to a go-around, and reconfigure the aircraft.

Pilots surveyed for the French study felt they were well-trained for engine-out go-arounds but not for those when all engines were functioning.

They also suggested that operators ought to simplify go-around procedures by training pilots to avoid "rushing" to retract flaps and landing-gear in favour of letting the crew concentrate on the higher-priority tasks of capturing pitch attitude and selecting go-around thrust.

There were already plenty of good reasons to pay attention to the conclusions of the French study, and the second go-around accident suffered by a Dubai-based carrier in five months simply offers another one.

Destruction of Emirates flight EK521 might also add a further twist to the complexity of training pilots to handle such events effectively. If the cockpit alarm, warning of a long landing, proves to have been the trigger event for the go-around, investigators will have to explore the decision process that led the crew to abort touchdown when some 3km of runway remained.

Countless accidents have resulted from crews' failing to conduct a missed approach in the face of an unstable approach.

The Emirates probe might need to look not just at whether the go-around should have been better-handled, but whether it was even necessary at all.