OPINION: Why US Air Force needs a low-cost gun-slinger

Roll the clock back six years to 2010. The US Air Force had just shelved a proposal to stand up a new wing of fighters based on the OA-X, a concept for a propeller-driven, light-attack fighter – reviving the role played by the Vietnam-era Douglas A-1 Skyraider.

Instead, the USAF would acquire OA-X aircraft on behalf of cash-poor partners, and let them operate the type. If the concept proved useful to those nations, service officials said they would reconsider the merits of standing up a light-attack wing.

Six years later, the Sierra Nevada/Embraer A-29 Super Tucano has made its combat debut with the Afghan air force (below). As expected, the OA-X concept was dusted off and re-studied. In late July, interest grew after a private USAF briefing to leading defence analysts suggested a light-attack fighter acquisition was back on the table. 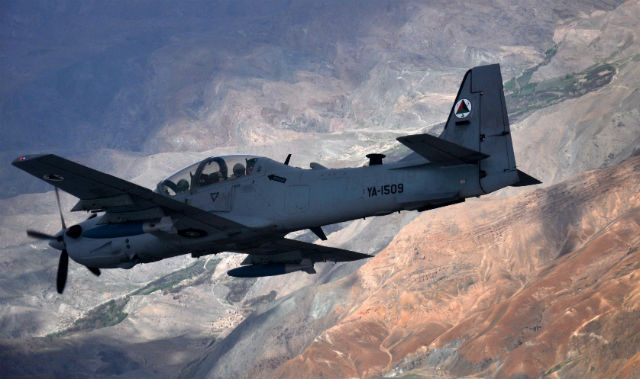 In fact, it was only a mirage. In remarks to reporters on 2 August, Air Combat Command chief Gen Herbert Carlisle made it clear that he has no more intention of acquiring a light-attack fleet than any of his modern predecessors. In Carlisle’s view, one dollar spent on light attack is one less the USAF can apply to higher priorities, such as the Lockheed Martin F-35A and Northrop Grumman B-21.

Of course, the Department of Defense launched the F-35A in 2001 expecting the fighter to be available for combat in 2011 and cost an average of $40 million, or $54 million if adjusted for inflation. Upon the declaration of initial operational capability on 2 August, the F-35A is projected to cost an average of $106 million, and that assumes Lockheed can drive that figure down to $85 million on a unit basis as production ramps up.

So it is no wonder that Carlisle is hoarding every dollar to replace a combination of nearly 2,000 Lockheed F-16s, Boeing F-15Es and Fairchild Republic A-10s with 1,763 F-35As over the next 20 years.

That does not mean, however, that there is no place for light-attack capability in a modern air force. Even in its current limited state, the stealth and speed of an F-35A is wildly out of place in combat against Taliban, Al-Qaeda and Islamic State targets.

A light-attack platform would be more vulnerable to ground fire than the Joint Strike Fighter, but still far more survivable than the utility and cargo helicopters that regularly fly in such airspace.

A Super Tucano costs one-tenth of an F-35A and a whole OA-X squadron costs the equivalent of two of the fifth-generation type; good value, in other words.