Howard Hughes’ Spruce Goose – more formally known as the H-4 Hercules – was until 13 April this year the largest aircraft ever to have flown. Conceived as a WWII transatlantic troop carrier, the fighting had, mercifully, ended before the flying boat finally flew, for just a few seconds, in 1947. Retirement followed. 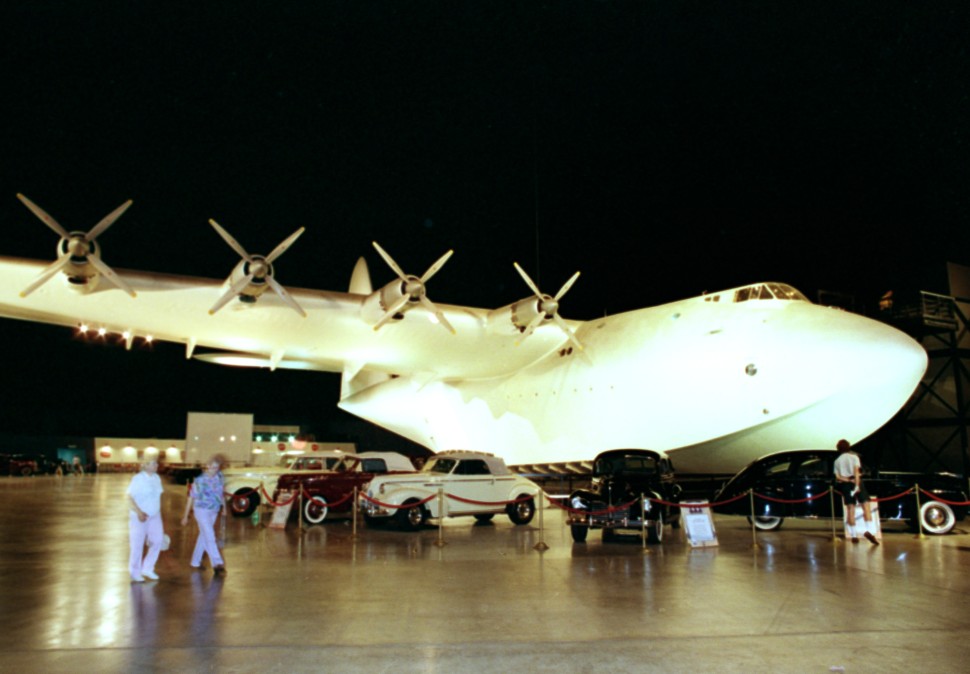 You’ll need a big museum for that

Today, the aircraft seems somewhat if not entirely ridiculous. A behemoth, outsized for the pre-jet era, it was by 1947 a solution to a problem that no longer existed. Its cost was as monumental as its vision, or folly: $23 million, nearly $300 million in today’s money, and much of it borne by the US taxpayer.

But hindsight offers such clarity. With the war in Europe raging and Allied shipping suffering staggering losses to German U-boats, the appeal of moving 750 troops or two battle tanks in comparatively well-controlled airspace must have seemed obvious.

Moreover, the wooden construction – mostly birch, not spruce – was a response to the necessary rationing of strategic materials such as aluminium. And, that construction was hugely imaginative; wooden plies and resin – fancy plywood – are a composite material not so different in concept than the thin aluminium and plastic plies that make up the skin of an Airbus A380.

The fact that development proved challenging and the war ended before it flew does not change the fact that it seemed like a good idea at the time.

Stratolaunch, usurper of Spruce Goose’s biggest-ever title, might seem equally ridiculous. Composite construction, two fuselages, six engines and other bits hacked together from old 747s, lots and lots of wheels and bogeys… But it flies, and apparently flies very well.

What we do not know is whether Stratolaunch has an economically viable future. Built to heft huge rockets to 35,000ft for air-launch, it is expected to start commercial life in 2020 launching Pegasus rockets, whose payload capacity is less than 400kg – a load easily orbited by any number of existing launchers. Moreover, Pegasus – normally air-launched from a modified Lockheed L-1011 – has flown only 35 times. Not a lot of demand there.

A company founded by Paul Allen, the Microsoft billionaire turned spaceflight visionary, presumably has the financial clout to keep moving forward. Technically, there is little reason to doubt it can achieve its goal of launching 6t payloads and maybe even spaceplanes. What remains to be seen is, will those missions make for a profitable business that maybe even needs a fleet of Stratolaunchers?