The dawn of a new generation of military rotorcraft might seem close at hand with the US Army’s Joint MultiRole SB>1 Defiant and V-280 Valor technology demonstrators taking form, but the Pentagon is not hurrying to replace trusted airframes like the Sikorsky H-60 Black Hawk or Boeing H-47 Chinook.

Science and technology officials connected to the prospective, army-lead Future Vertical Lift (FVL) programme say bringing a completely new rotorcraft online requires substantial time and money, and most importantly, someone to request a new rotary wing airframe over an upgrade or life-extension of the current type. Today, there is no definitive requirement for FVL, except a general desire for greater range and speed.

FVL aims to deliver next-generation rotorcraft in light, medium and heavy-lift categories for all services, but Michael Fallon of the navy’s rotary wing science and technology office says military spending levels are the “huge determining factor” in deciding if and when long-serving aircraft types like H-1, H-60 and V-22 will be refreshed or replaced through FVL.

“It’s really going to depend on the programmes of record and if they’re going to sundown. That’s something for them to decide,” he said at the Centre for Strategic and International Studies in Washington this week. “We’ll see how this plays out.”

There is concern among industry that the Defence Department is dragging its feet on FVL, with current targets estimating initial operational capability of a new mid-sized rotorcraft in the early 2030s. Sikorsky and Boeing are pursuing a propeller-pushed, coaxial rotor design (SB>1), while a Bell/Lockheed Martin V-280 team are backing third-generation tiltrotor technology.

Bell Helicopters says those Joint MultiRole-Technology Demonstrator (JMR-TD) teams are spending an “unsustainable” amount on their competing rotorcraft concepts – with industry investing $3 for every government dollar. Bell would prefer an IOC date closer to the mid-2020s for its tiltrotor concept.

FLV science and technology team leader Ned Chase says the FVL acquisition timeline is “still fluid” since there is no programme of record or dedicated funding for technology research.

He says the timeline could extend or contract depending on future budgets and needs, but the main goal right now is to mature FVL technologies to high readiness level by fiscal year 2022 in anticipation of a future requirement.

Chase says the substantial industry investment is “a heck of a bargain for the government,” and there is a willingness to compress the timeline, but current funding constrains make it difficult.

“That’s always a consideration because there’s probably a belief that the shorter the acquisition timeline the more money you can save,” he says. “I think that’s probably offset maybe by how much money you have and how much is available to you.”

SB>1 and V-280 are expected to fly in late 2017, with the JMR-TD programme running through 2019 to inform the requirements for FVL.

Chase says FVL must be a sustained science and technology effort with spinoffs throughout its timeline. “I would not suggest the technologies we’re looking for are particularly far term. I would say at farthest, maybe mid-term," he says. 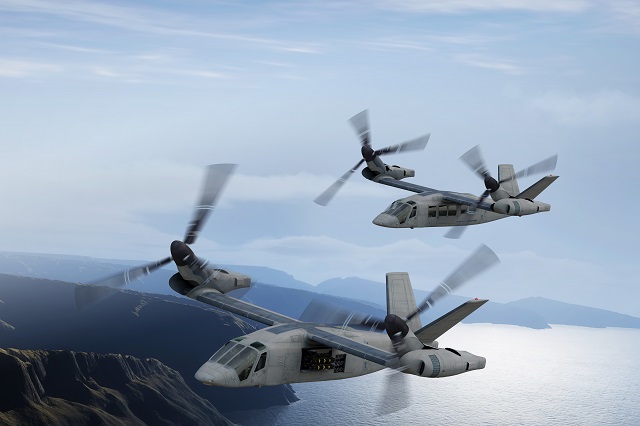