INSIGHT FROM BOMBARDIER: 25 years of the regional jet: four reasons to why the future is small and it's huge

CRJ Series regional jets have transformed the airline industry over the past 25 years, and promise to keep making aviation better and more accessible to more communities around the world over the next 25 years and beyond

The CRJ Series jets are synonymous with growth. They rose to popularity because of distinct operational advantages: optimized seating capacity, cost and fuel-efficiency, operating range, and flexibility of route development. These aircraft helped airlines expand profitably, offering critical and convenient air service to smaller communities. In Germany, where the CRJ100 first launched, the aircraft helped Lufthansa reliably and cost-effectively add services to Western and Eastern European cities from its hubs in Frankfurt, Munich, Dusseldorf, and Hamburg. 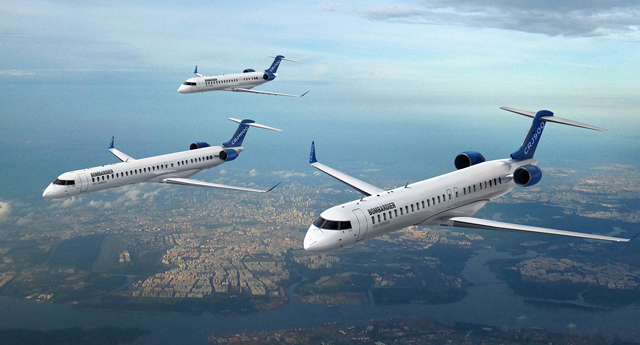 Air Canada put CRJ aircraft to work on new trans-border routes to city pairs in the U.S. after the signing of the Open Skies agreement between the two countries in 1995. In the U.S., they helped airlines expand to underserved airports in smaller communities without violating existing “scope clause” agreements with mainline fleet pilots and brought additional traffic to the mainline hubs.

While some banked on the scope clauses in the U.S. to ultimately disappear, industry consolidation actually led to their re-enforcement. As Courtney Miller, Director, Lessor Sales at Bombardier Aerospace explains:

“With the Continental-United merger, the newly merged pilot group adopted the Delta scope clause, almost to the letter. American also merged with US Airways, putting an end to both the US Airways East and US Airways West clauses, and aligning with Delta and United at 76 seats. Just as importantly, maximum take-off weight limitations were aligned at 86,000 pounds, which has created problems for new generations of heavier

The “scope clause” driving growth of regional aircraft in the U.S. continues, and is projected to intensify in the decades ahead. In its 2017-2037 Aerospace Forecast,1the U.S. Federal Aviation Administration (FAA) predicts that the regional fleet will grow in favour of 70-90 seat planes by 2023, serving routes where 50 seat aircraft may be prominent today. The FAA writes: “By 2025 only a handful of 50 seat regional jets remain in the fleet. By 2037, the number of jets in the regional carrier fleet totals 1,828, up from 1,637 in 2016.” This will be consistent with the U.S. mainline and regional airlines’ move towards improved capacity management. There are material gains for airlines and passengers alike from including right-sized aircraft in the fleet mix, not least of which are cost-efficiency and greater access to air service.

The labor costs to operate CRJ aircraft, for instance, can be as much as 70% lower than costs to operate larger aircraft. CRJ aircraft are also more fuel efficient, with continuous design improvements reducing fuel burn, and support more disciplined capacity management.

“Airlines used to look at some metrics like cost per seat which I think is becoming obsolete. The reason is the importance of making profit. The cost per seat put those airlines in a direction of up-gauging, needing to fill those planes, bigger and bigger at the expense of yield. What we’ve seen over the past ten years is a drop in yields of 25% worldwide, which at the end of the day led to a lot of airlines being in the red,” Patrick Baudis, Vice President & Head of Marketing at Bombardier states. “To fill the plane at all expense and not look at the traffic aspect has been detrimental for many markets. We’re in a situation where airlines are moving back from that and looking at revenue and profit. Yes, the cost is important but the revenue and right sizing are important too.

Instead of operating an empty plane, airlines now look at operating the right sized plane. That is, a plane that doesn’t bring too much risk, that is easy to fill; without having to drop yields to reach the 80-85% load factor that airlines want. This is a trend that we see in airlines and one that we expect to see for a long time.” The FAA highlights the effectiveness of this more effective capacity management as a profit booster in its Aerospace Forecast, stating: “The shift in focus from market share to boosting returns on invested capital has resulted in something the industry has rarely seen — sustained profitability. The U.S. airline industry has become more nimble in adjusting capacity to seize opportunities or minimize losses.”

To boost competitiveness against Low-Cost Carriers in their markets, airlines are breaking away from strict hub-and-spoke service models. This has the carry-on effect of creating new opportunities for regional feeder routes. As industry analyst Addison Schonland of AirInsight explains, “What many airlines are doing is to ‘hub bust’ by serving direct flights between secondary cities. The 787 is a typical hub buster. But as these hub-busting flights gain momentum, these secondary cities become ‘hublets’ of their own, requiring feed and distribution. So the need for regional service remains even as it changes and evolves.”

Patrick Baudis at Bombardier also believes service to secondary markets will become increasingly important to meet growing demand in the coming decades. “The next growth opportunity we see is the secondary markets,” he says. “For example, take the Midwest in the U.S., which has been deserted by a lot of airlines because they could not find the right equipment with the right economics to serve these markets. Now, with a new generation of planes, there’s a desire to get back to those markets.

With right-sized equipment, there is a tremendous growth coming from those markets.”

3. Starting Up in China

The Chinese air travel market is projected to grow dramatically in the coming decades, both internationally and domestically. Speaking at an airline roundtable in Beijing in February 2017, IATA Director General and CEO, Alexandre de Juniac highlighted the progress and promise of this market. “Chinese airlines and airports rank among the top 10 by passenger numbers.

Investment in infrastructure, including the second airport in Beijing, will ensure that airport capacity is available to meet the expected traffic growth. IATA’s forecast is that by 2024, China will overtake the U.S. as the world’s largest passenger market. And in 2035, China will be a market of 1.3 billion passengers,” he said.

But that rapid growth creates new challenges for the country, demanding the rapid development of infrastructure and consistency of service beyond the large hubs. As Colin Bole, Senior Vice President, Commercial at Bombardier explains:

“The Chinese regional market is underdeveloped compared to U.S. and Europe. They are building 74 airports over the next five years, and they are implementing policies to encourage regional aviation using smaller more efficient aircraft, versus the trunk line growth that has dominated the Chinese market for the past 20 years.”

“We believe the newer models of the regional jets (CRJ700/CRJ900) are the most attractive for Chinese airline startups,” AirInsight concludes in its analysis of this market. “If China sees strong demand for regional jets, Bombardier and Embraer are bound to win new orders. If this assumption is accurate, this would be a further boost to demand for new regional jets.”

“There are some regional jets in China, about 200, so it’s a very small percentage of the Chinese fleet. We see that percentage should grow. We don’t know what the final figure might be, but compared to the US and Europe, it is 20-25%. The smaller jets are more efficient in smaller cities where you have thinner routes 80-90-100 passengers, instead of the 200 or so on larger routes,” Bombardier’s Bole says.

As passenger numbers grow around the world, passenger satisfaction will become more critical to protect airline brands. While surveys show that passengers are, on the whole, more satisfied with air travel today, you might not know it from following social media commentary.

The democratization of flight, paired with the rapid-fire sharing of our always-on lifestyle, means that even the slightest complaint can go viral. As a result, airlines have to be more mindful of maintaining a quality standard of service without burning through that profitability they have carefully developed. Right-sizing and service re-structuring by using regional aircraft can help with this too. Some airlines have found that establishing convenient shuttle services targeted at frequent business travelers on common business routes, with special menus, cabin comforts, and VIP treatment, have proven successful and profitable. There is an opportunity to do so by operating modern regional aircraft, with enhanced passenger experience features and more frequent schedules. Delta has had great success with its shuttle service model attracting high-yield passengers. Originally launched to serve key business destinations on the East Coast of the U.S., Delta has expanded Shuttle service to the West coast.

With its newly-launched modern cabin design, ATMOSPHÈRE by Bombardier, the CRJ Series aircraft have a potential to be a Shuttle Service powerhouse, offering more carryon capacity, contemporary styling and additional passenger amenities.

Small Is Getting Bigger Every Day

The market dynamics in the regions that fostered the success of the first 25 years of Bombardier’s CRJ Series aircraft continue to grow at a fast clip with new larger aircraft featuring enhanced passenger experience, replacing the original 50-seat models. And while CRJ aircraft have become synonymous with access to smaller communities in North America and Europe, there remain huge growth opportunities in emerging markets from 2nd and 3rd tier cities. We see the rise of the regional market expanding fast in many markets such as Latin America, Africa, India, Middle East and China. As they advance to 50 years in service, and beyond, these big “little planes” still have a long way to grow.

As the leading regional aircraft, and to meet rising airline passenger expectations in the 21st century, Bombardier upgraded the cabin of the CRJ Series. The new Atmosphere cabin features state-of-the-art design and technology while boosting fuel efficiency and overall environmental sustainability. Learn more about the new Bombardier CRJ Series aircraft, and the ATMOSPHÈRE design.

Discover more about the CRJ Series