INSIGHT FROM BOMBARDIER: Celebrating 20 years of the Q400 - the reliable all-terrain turboprop

For 20 years, the Q400 aircraft has helped develop new markets, connect underserved cities, and make safe, reliable air-travel possible even in the world’s most remote locations

A PEOPLE CONNECTOR AND NETWORK BUILDER

Connecting people and communities is what the Q400 does best, even in some of the harshest conditions, from narrow gravel runways in frigid northern Quebec, to hot and high airports in North Africa and Asia. As a result, this aircraft plays an important role in developing economies and growing communities. It brings families together while supporting social mobility and economic independence.

Because it can serve smaller markets efficiently and cost-effectively, with enough range to bring passengers to the world’s capitals; airlines have relied on the Q400 to strengthen their networks for the past two decades.

A MODERN, RELIABLE AND CONFORTABLE WORKHORSE

The Q400 aircraft has been designed as a modern, 21st-century turboprop. As the Q (for quiet) suggests, it is designed to offer passengers a safe and comfortable ride while respecting the peace of neighbouring communities. It is also a fuel-efficient aircraft, which makes it an environmentally responsible choice.

But the Q400 is also a robust and reliable workhorse, with the power to keep up with the high cycle and quick-turn demands of regional airlines. As a result, Q400 operators worldwide have achieved a dispatch reliability of 99.5 percent and schedule completion rates of 99.7 percent.

Bombardier has sold over 1,200 Q Series worldwide, with over 60 Q400 owners and operators in over 90 countries. The worldwide fleet has logged 8 million flight hours and has transported 500 million passengers to their destinations comfortably, safely and on-time. 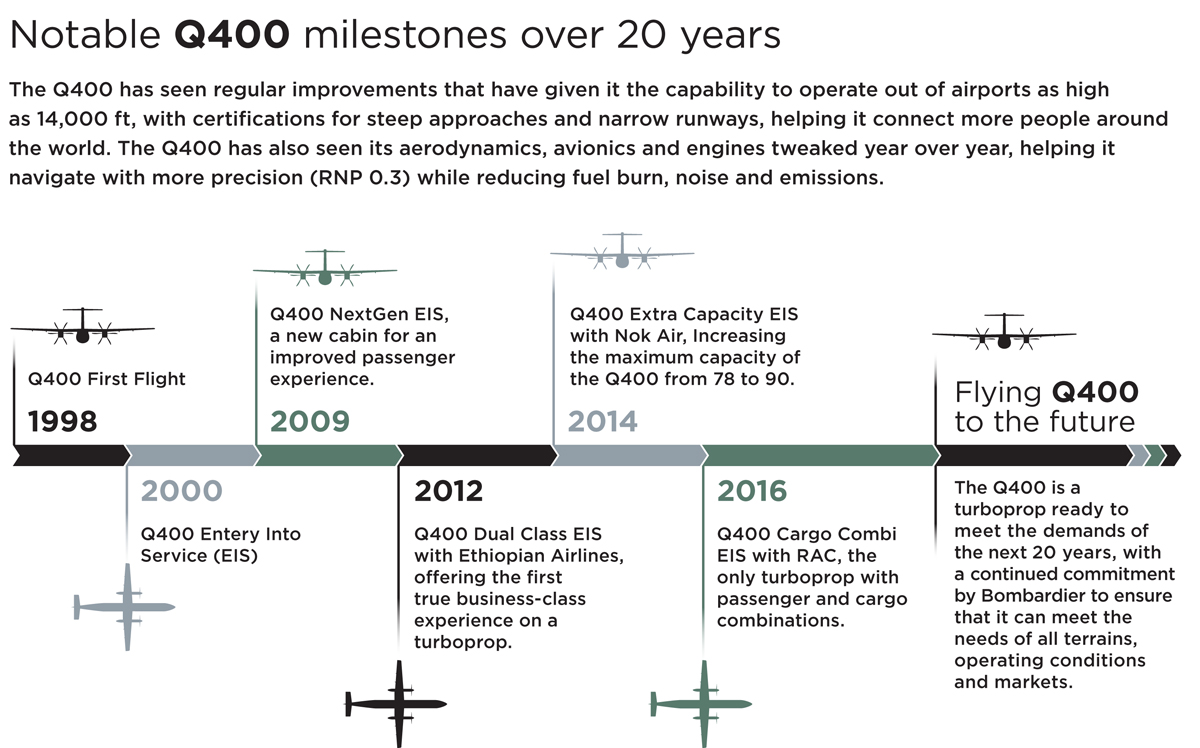 To date, Ethiopian Airlines has purchased 34 Q400 aircraft (with 5 additional options), representing the largest and most modern turboprop fleet in Africa.

“The Q400 airliner has played a critical role in developing new markets and increasing frequencies to support improved air travel in Africa. We are committed to supporting the Single African Air Transport Market and the Q400 is a very important tool to ensure reliable, cost effective and modern air transport in the continent.” said Tewolde Gebremariam, Group Chief Executive Officer, Ethiopian Airlines. “Building on our partnerships with Asky and Malawian Airlines, we are now progressing in a partnership with Guinea Airlines, Zambia Airways and Ceiba Intercontinental (Equatorial Guinea) as well as new opportunities in Chad and we will soon launch Ethiopian Airlines Mozambique using the Q400. These markets all require a reliable fleet for their domestic and regional connections. Our core fleet of Q400s will support all these requirements as we continue to work with Bombardier to support and maintain the aircraft through our approved Q400 Authorized Service Facility and our Q400 full flight simulator,”added Mr. Gebremariam.”

Operator Air Baltic touts the environmental benefits of the 12 Q400 aircraft in its fleet, saying: “One of the greatest benefits of the aircraft is its contribution to helping preserve the environment—the Q400 uses less fuel (approximately 30 percent less than older, inefficient jets of the same size) and produces less emissions than similar aircraft.” With a range up to 2,000 kilometres these 76-seater planes help AirBaltic serve major European destinations.

“I am sure this fresh order will help us further enhance connectivity to smaller towns and cities and help realize Prime Minister Narendra Modi’s vision of ensuring that every Indian can fly,” said Ajay Singh, Chairman and Managing Director, SpiceJet.

“SpiceJet operates India’s largest regional fleet and has always been a firm believer in the growth story of India’s smaller towns and cities. We have worked hard over the years to put these smaller towns on the country’s aviation map and will strive to keep that momentum going in the times to come.”

The Q400 has also made room for brand and service differentiation. Flag carrier, Philippine Airlines, which has been undergoing a brand refresh program, became the world’s first operator of a new dual-class 86-seater Q400 last summer. At the 2017 Paris Air Show, Philippine Airlines exercised its purchase rights for seven additional units bringing its total order to twelve.

“As we position ourselves for growth, we are pleased to be adding more Q400 to our fleet to strengthen our domestic operations,” said Jaime J. Bautista, President & Chief Operating Officer, Philippine Airlines. “We are thrilled about the opportunities that lie ahead, and we look forward to offering more capacity and improving connectivity in the region with comfortable, fast and efficient regional aircraft like Bombardier’s 86-seat turboprops.” 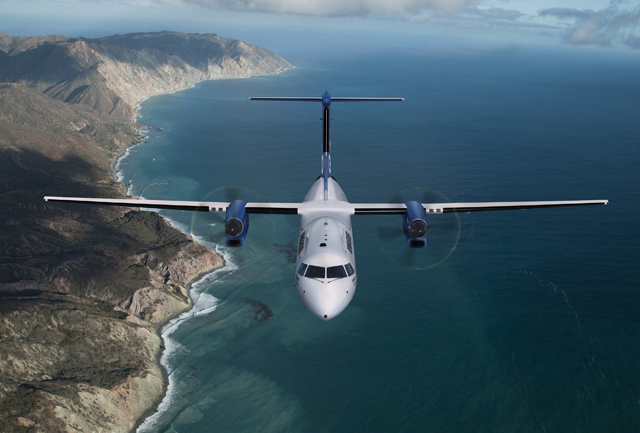 Flying Q400 to the Future

In all of its variants, the Q400 is a turboprop ready to meet the demands of the next 20 years, with a continued commitment by Bombardier to ensure that it can meet the needs of all terrains, operating conditions and markets—large and small—reliably, efficiently and safely.