The companies announced a teaming agreement at the show that will see Northrop develop, produce and integrate scramjet engines on Raytheon’s air-breathing hypersonic weapons. 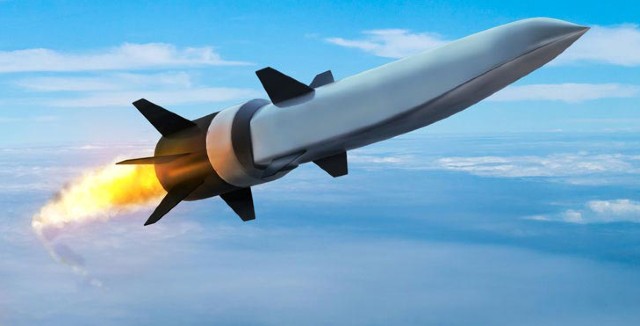 “We’ve been working together probably for five or more years, certainly collaborating on a variety of programmes,” said Tom Bussing, vice-president Advanced Missiles Systems at Raytheon, during a media briefing.

Most recently, the two companies have been working on the joint US Air Force and US Defense Advanced Research Projects Agency Hypersonic Air-Breathing Weapon Concept, or HAWC – a $200 million effort to flight-demonstrate a scramjet-powered, air-breathing hypersonic missile.

Demonstrations have already been carried out on the ground, proving the performance attributes of the HAWC system and showing it is capable of meeting requirements. “We have a flight test planned – that is in the near future, where we will start to fly this particular class of system,” Bussing says.

The HAWC system can be used against a variety of targets, and launched from either ground or air platforms.

Air-breathing scramjets are usually rocket boosted to supersonic speeds, before the scramjet engine is ignited so that the vehicle can cruise at up to Mach 5 and above (the definition of hypersonic) in the upper atmosphere. This differs from boost/glide hypersonic weapons, which are gliders that are propelled to above the atmosphere and then skip off it for range.

“The efficiencies are just great,” says Wilcox, adding that efficiencies are also gained by using additive manufacturing, with all of the scramjet components now being made using this method – although the actual material is undisclosed. “We are also looking at ways to reduce the weight so we can have more fuel and more payload,” he says.

Northrop believes that it is the first company in the world to 3D-print a full combustor for an air-breathing scramjet engine. “That’s what is going to drive the affordability for hypersonic missiles,” Wilcox notes.

The aim will be to eventually bring the costs of hypersonics down to the point that they can compete with cruise missiles. In the future, artificial intelligence is also likely to play a key role, particularly when it comes to terminal-phase targeting, where the vehicle is required to rapidly process vast amounts of data. This could open up tactical possibilities such as swarming using multiple hypersonic vehicles.

“We are excited about this – it is a game changer,” says Wilcox.