The US Navy properly justified its requirement for 70 maritime versions of the Northrop Grumman RQ-4 Global Hawk, the Pentagon’s top auditor says, but the final number depends on the aircraft’s performance after 100,000 flight hours.

The navy based its Northrop MQ-4C Triton production quantities on an attrition rate of four aircraft every 100,000 flight hours, but the true attrition rate won’t become clear until fiscal year 2021.

In a report published 16 September, the DOD inspector general recommends the navy update its aircraft requirements as more engineering and test data becomes available, but says the 70-aircraft force requirement is justified based on the data at hand.

The navy intends to establish five Triton bases with four operational aircraft each to maintain continuous 360◦ airborne surveillance around the global. The operational fleet would consist of 20 primary aircraft, but many more aircraft and needed for test, training and attrition.

According to the report, the navy will purchase four test aircraft and 66 mission aircraft from Northrop through 2032, and it intends to stand up one operating location every year starting in 2018. The Triton programme is projected to cost $22.7 billion: $3.5 billion for research and development, $7.6 billion for procurement, and $11.3 billion for operation and support.

The great investment has drawn the attention of DOD auditors, and this auditor’s report is the first in a series of close examinations expected to continue through 2016. 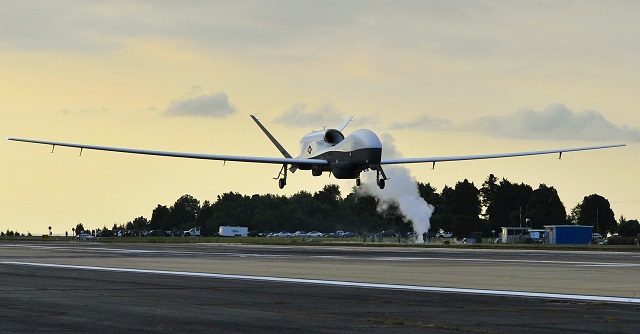 The MQ-4C programme began in 2008, and an initial production decision is expected this December. The positive auditor’s report will help the navy justify the numbers to the Office of the Secretary of Defence at a time of stagnant defence spending.

The air force originally intended to procure more than 63 Global Hawks, but the final quantity was capped at 45 and some variants have since been retired, and the navy’s 70-aircraft buy is likely to come under pressure as the annual investment increases into the 2020s.

“Prior to the full-rate production decision planned in fiscal 2018, it is important that navy officials re-validate the accuracy of the engineering estimates after operational test data become available,” the inspector general says in the report.

The inspector says the navy intends to conduct operational test flights and simulation later this year that will inform the initial production decision.

Northrop is currently on contract for four aircraft, two prototypes and two production-representative aircraft. As of August, the third aircraft is due September 2016 and the fourth will be delivered in February 2017. Production will average four aircraft per year through 2032.

Initial operational capability is planned for April 2018 and the full operating capability target is 2023.