The US Air Force will establish an “adaptive engine” demonstration and validation programme in fiscal year 2016 if Congress approves $1 billion in proposed funding, the USAF confirms to Flightglobal.

“Nothing’s been formally decided, so it’s too early to speculate, but GE [has] successfully tested our adaptive-cycle design with the Air Force for the past six years,” GE tells Flightglobal. “It’s sensible to continue those tests to incorporate even more technology.”

In recent years, engine makers, in partnership with the USAF, have worked on “adaptive” air bypass engines in an effort to produce “sixth generation” fighter engines that are 25% more fuel efficient.

Today’s jet engines split air into two streams – one that moves through the core, where it is compressed and ignited, and another that other bypasses the core.

To achieve the USAF’s goals, engine makers are now developing engines with another bypass stream that can be adjusted, like upshifting gears on a car, based on the aircraft’s speed. 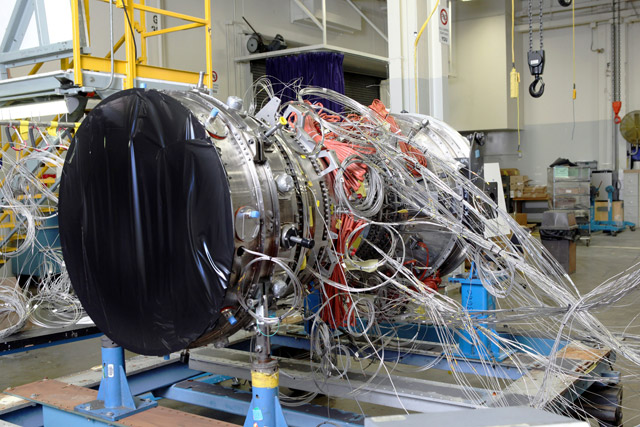 The Pentagon’s proposed $1 billion investment will be included in President Barack Obama’s 2015 budget plan, which is expected to be released 4 March and must then be approved by Congress.

“That statement... signals that the Defense Department understands how important this technology is,” Pratt and Whitney tells Flightglobal. “We need to start working now towards...sixth generation capability.”

The work has already started.

Pratt & Whitney also submitted a bid, but was not selected.

The design meets the 25% fuel efficiency goal and has 5% to 10% more thrust than the GE/Rolls-Royce F136 engine, which was developed for Lockheed Martin’s F-35 Joint Strike Fighter, according to GE.

In September of last year, P&W held an initial design review of an adaptive engine concept based on a highly-modified F-35 engine, the company said.

P&W also launched an evaluation test rig of its adaptive inlet fan that will be used inform the design.

The company, which makes the F135 engine in the F-35, claimed last year that it sustainably ran a testbed version of the F-35 engine at possibly the hottest temperature ever recorded in a turbofan engine. Increased thermal capacity can allow for greater thrust and more engine capability.

The company redesigned blades in the high-pressure turbine to resist higher temperatures and coated the blades with a thermal barrier material, the company has said.

"Being able to generate higher temperatures, not to mention a suite of other technologies, will be key to the next generation of development as well," says P&W.

GE says the ADVENT programme has given it a “six-year head start” on AETD.

In November 2014, the company plans to hold a two-week review of its preliminary design with the USAF.

Rolls-Royce was not selected for AETD, but tells Flightglobal it looks forward “to seeing more details on the [Pentagon’s] proposed investment in new engine technologies.”

“We have been involved in a number of programmes that have looked at a variety of engine technologies, including variable cycle.” Rolls-Royce says.