The president of Boeing Phantom Works sees a future for the group's stratospheric Phantom Eye UAV in carrying solid-state lasers for high-altitude sensing and communications missions and then possibly missile defence some time in the next 20 years.

The small-scale Phantom Eye demonstrator aircraft completed nine successful flights before being placed in storage at NASA’s Armstrong Flight Research Centre in California last year. But Boeing is still looking for opportunities in the military or commercial sectors to carry the development programme forward.

The primary application initially would be as a high-flying satellite surrogate for ground surveillance or communications relay, but further down the road Boeing thinks there could be applications to carry a solid-state laser once the size, weight and power of the technology decreases.

“What I could hypothesise is the potential for a stratospheric UAS to carry a solid-state laser, doing sensing missions and maybe someday evolving to have the power output to be able to do some missile defence,” Phantom Works president Darryl Davis said at a press briefing in St Louis, Missouri, May 18. “Those things are being studied by our team all the time.

“It all comes down to the pace at which solid-state lasers actually come to the market place.” 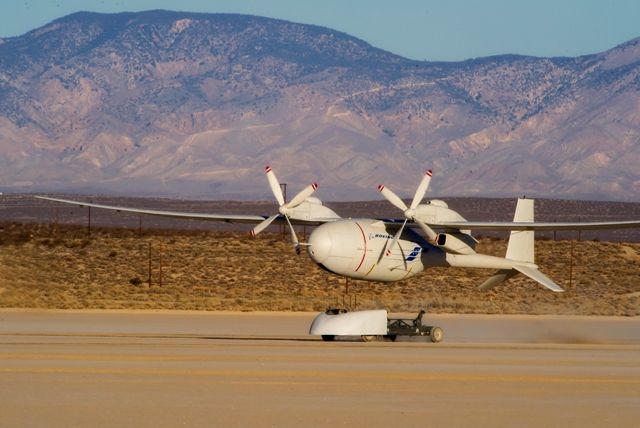 Boeing built the colossal YAL-1 Airborne Laser Testbed, which was a chemical oxygen iodine laser, or COIL, laser weapon system integrated with a 747-400 airliner. That programme was terminated due to the immense cost per shot and a technological shift toward solid-state, electric-powered laser weapon systems.

The US Defense Department has several ongoing programmes to mature laser technology for land, sea, air and space-based applications, and there is interest from the US Special Forces community in conducting a laser weapon demonstration on a AC-130 gunship using modern lasers.

“There is a lot of interest from a lot of our customers, but there is an awful lot of technology maturation still to go on solid-state lasers,” Davis says. “We don’t want to be looking at chemical lasers, because they come with a logistics tail that becomes complex. A solid-state laser you can recharge and cool more often, whether it’s in a persistent, stratospheric UAV or in a potential future fighter.

“As some of those payloads become more efficient and smaller in size with higher power outputs, we could very easily see, potentially in the next two decades, you could have that kind of a platform doing a sensing mission for sure, and potentially even some communications missions and then evolving someday into a stratospheric, persistent, directed-energy platform.”

The Phantom Eye flew for eight to nine hours at 54,000ft during its last test. The company believes that performance can be expended to several days and at a higher altitude with more investment. 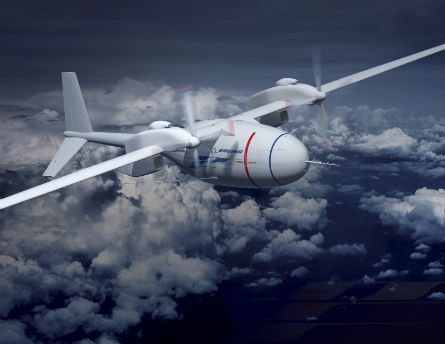