The iron bird is a key test facility necessary for the validation and integration of different systems on the aircraft, which will also allow for troubleshooting, says Comac.

A picture of the iron bird released by Comac replicates the layout of the aircraft, with wings and a vertical stabiliser.The rig is located at Comac’s facilities in Shanghai. 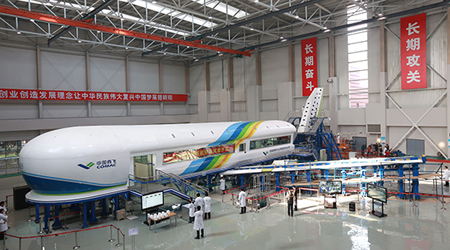 The airframer started installation of parts on the iron bird ground rig in August. Earlier this month, the horizontal stabilisers for the iron bird were also delivered by Shanghai Aircraft Manufacturing.

Comac announced in August that the C919's first flight has been pushed back a year to the end of 2015. The programme has entered the "most critical stage of engineering development" as detailed design continues. Aircraft structural data has also been distributed, while parts and components manufacturing is currently "in full swing" across at least five different Chinese cities.

Comac has secured 400 aircraft on its backlog for the C919, mostly from Chinese airlines and leasing companies.