A submersible aircraft's performance requirements have been outlined in a US Defense Advanced Research Projects Agency broad agency announcement that requests a concept design and proposals for proof of concept experiments by 1 December.

DARPA's strategic technology office wants an aircraft that can reach a destination, whether it is 1,850km (1,000nm) away by air or 185km by sea or 22km travelling underwater, in less than 8h.

Carrying a crew of eight and 910kg (2,000lb) of payload it would use a snorkel to provide its powerplant's air supply while submerged at shallow depths once at its target. The submersible aircraft would be used for inserting small clandestine teams along coastal waters. After the insertion it could then loiter for up to three days, perhaps at the surface, until the crew rejoined it.

DARPA admits that past efforts in the same area included failed designs to make a submarine fly: "Prior attempts to demonstrate a vehicle with the manoeuvrability of both a submersible and an aircraft have primarily explored approaches that would endow flight capability to platforms that were largely optimised for underwater operations. Unfortunately these attempts have been unsuccessful." 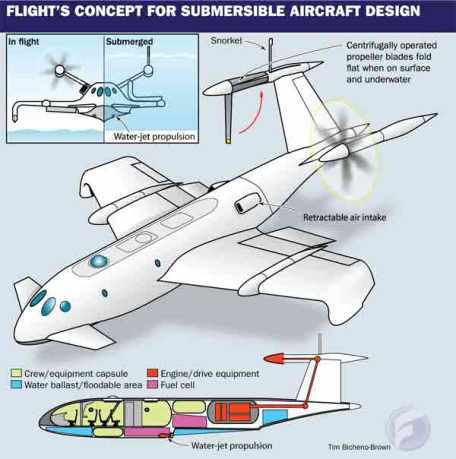 Because the flow conditions of being underwater are so different to being airborne, due to the fluids' respective densities, DARPA also envisages a platform that reconfigures for the two different domains.