Airbus has incorporated a number of upgrades onto Berlin’s latest example, including the ability to operate from unprepared grass runways, act as an aerial refuelling tanker, and take off in temperatures of up to 55°C (131°F).

In addition, the A400M's defensive aids system has been improved, extra air-drop cargo and paratrooping capabilities have been added, and the aircraft can now operate at heights as low as 150ft above the ground in daylight and 300ft at night. 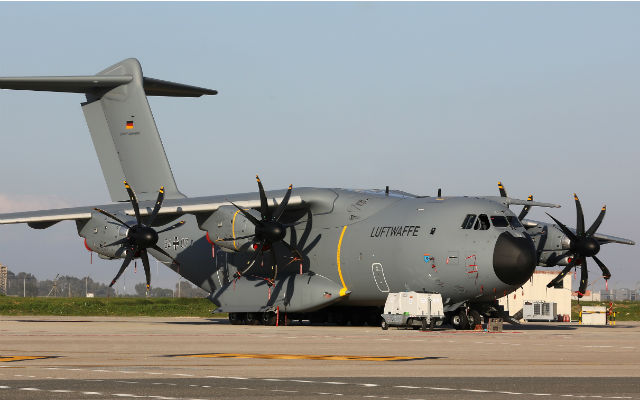 “The A400M programme has made enormous progress this year in implementing these critical capabilities on the aircraft,” says Airbus A400M programme manager Kurt Rossner.

“In addition to having twice the payload-range of the legacy transports like the C160 [Transall] and C-130 [Hercules] that it is replacing, it can now also operate from any runway that those older aircraft could use.

“There is no other aircraft in the market with the A400M’s combination of tactical and strategic capabilities and it is going to transform Germany’s air mobility force.”

The electronic support measures suite introduced on the latest configuration includes a missile warning receiver, radar warning receiver and expendable decoy, which is integrated by Airbus in Ulm, Germany.

Items weighing up to 8t each can now be dropped from the transport’s rear ramp, and sticks of up to 20 paratroopers can deploy from the ramp or side doors. Airbus has demonstrated 30-paratrooper sticks, with certification to follow, it says; work is under way to increase numbers to 40 and ultimately 58, it says.

In addition to the grass runway approval, Airbus is looking to certifcate the A400M to operate from gravel and sand surfaces, with tests already having taken place.

Redundancy measures have also been incorporated, with the transport approved to take off and fly using three of its four engines.

Germany's preceding five aircraft will also be retrofitted to the new standard.