A Biman Bangladesh Airlines Airbus A310-300 has been involved in a take-off accident at Dubai International Airport, resulting in a temporary closure of the Gulf airport.
The A310 – one of four operated by the airline, according to Flight’s ACAS database – was operating a service to Dhaka. Some reports suggest the aircraft suffered a tyre burst and/or nose-gear collapse during its take-off roll. Pictures of the accident show that the aircraft appears to have come to rest at the far end of Runway 12L with its nose gear collapsed. 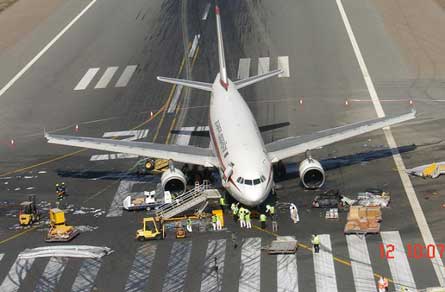 Biman Bangladesh says that its “flight BG006 from Dubai to Dhaka had an accident during departure and failed to take off around 06:30 today. All 236 passengers, including crew, are safe, and were immediately evacuated from the aircraft. Fourteen passengers sustained minor injuries.”
According to the Dubai Department of Civil Aviation, Dubai International Airport is undergoing “an 8h closure starting 06:30, March 12, 2007”.