Embraer completed the first flight of its E-Jet E2 family today months ahead of schedule, in a milestone that it says is a sign of the programme’s maturity.

The aircraft departed from Embraer’s facility in Sao Jose dos Campos at 13:06 local time and was airborne for 3h 20min. Embraer had earlier said it expected first flight to take place in the second half of 2016, and surprised the industry when it announced on Twitter that it was conducting first flight today.

Calling the flight “fantastic”, Embraer chief operating officer and senior vice-president Luis Carlos Affonso tells Flightglobal: “It was the best first flight ever at Embraer… We could significantly open the envelope in terms of altitude, speed, systems, fly-by-wire, flaps, landing gear… It was a very successful flight.”

He says that the programme had experienced fewer challenges than anticipated. “We had reserved a time buffer for challenges, but we did not use all of the buffer and we flew earlier than expected.” 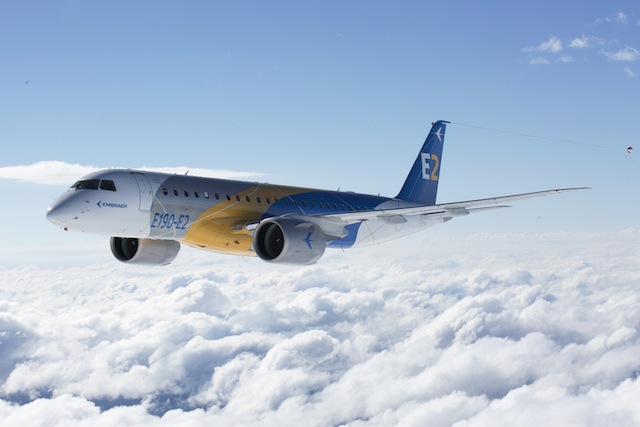 The E190-E2 was rolled out on 25 February, as the first of three variants in the E2 family. Embraer is still targeting 2018 for entry into service, and this could happen as early as the first quarter that year if testing goes well, says Affonso.

Embraer captain Mozart Louzada, who piloted the flight today, says: “We were able to significantly open the flight envelope by flying at Mach 0.82, climbing to 41,000 feet and retracting the landing gear and flaps, and engaging the fly-by-wire in normal mode.”

Affonso tells Flightglobal that the E190-E2 is “slightly” below weight. While he declines to specify the weight difference, he says: “It’s slightly below weight. What is remarkable is that it’s not above weight which is the norm for a new aircraft design.”

He points to how the E2 family is not just a re-engined aircraft but also has a new wing and landing gear among other parts. “It’s a function of a job well done by our engineers,” he says.

Embraer plans to eventually have four prototypes in the flight test programme for the E190-E2. The second aircraft will likely fly in a month’s time, followed by the third in another month and a half. A fourth aircraft, which will be configured with a full cabin interior, will fly in late-2016 or early 2017.