flightglobal.com has obtained exclusive photographs of Lockheed Martin's first F-35 Joint Strike Fighter (JSF) as it emerged from the paint shop at Fort Worth, Texas ready for its formal roll-out and naming on 7 July.

Aircraft AA-1 (pictured below), an F-35A conventional take-off and landing (CTOL) variant of the JSF, is expected to fly by late October.


As a result of a redesign to reduce the weight of the F-35B short take-off and vertical landing (STOVL) variant, AA-1 is a one-off and not fully representive of the production JSF. It is being used to validate design, manufacturing, assembly and test processes for the 14 development flight-test aircraft that will follow.

Powered by a Pratt & Whitney F135 engine, AA-1 is equipped with most of the vehicle systems planned for later F-35s, including the fly-by-wire/power-by-wire flight controls and flat-panel cockpit displays. The mission systems, incuding active-array radar and 360deg infrared sensors, will be tested in later aircraft.

AA-1 carries the flags of the eight international nations involved in development the JSF (pictured below): Australia, Canada, Denmark, Italy, the Netherlands, Norway, Turkey and the UK, which is the only Level 1 partner. Lockheed and the US government are hoping the eight nations will sign a memorandum of understanding on the JSF production, sustainment and follow-on development phase in December. 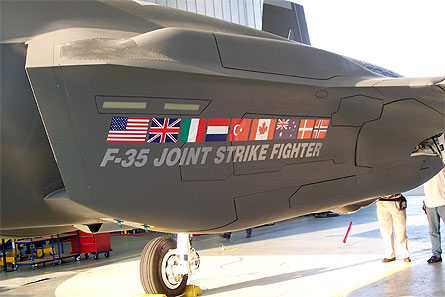 It's only a matter of time before Lightning II pilots are saying "WIWOL" says Kieran Daly. Read his blog.