Lockheed Martin has conducted a fit test of the F-35 Joint Strike Fighter’s (JSF) Pratt & Whitney F135 turbofan engine, as the US Department of Defense appears to have killed off the aircraft’s alternate F136 power plant being developed by General Electric and Rolls-Royce.

Conducted on Lockheed’s Fort Worth assembly line in Texas in early February, the successful fit test (pictured below) comes as a precursor to the F135’s formal integration with the JSF programme’s first system development and demonstration (SDD) phase aircraft in mid-February. 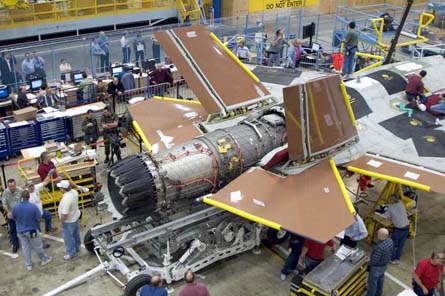 Lockheed says it conducted the test installation while it was awaiting the delivery of a wiring harness to fully integrate the engine, and that the power plant is “scheduled for integration within the next couple of weeks”. P&W finished assembly work on the 40,000lb (178kN)-rated F135 last December.

Submitted early this week, the DoD’s fiscal year 2007 budget request excluded any funding for the F136 programme, which has been threatened with cancellation since late last year. The alternate engine is being developed under a $2.4 billion SDD contract placed in August 2005.