First images from the scene of the Gulf Aircraft Maintenance (Gamco) hangar fire in Abu Dhabi confirm that the aircraft at the centre of the blaze, a Qatar Airways Airbus A300-600, has been completely destroyed.

Information emerging from Abu Dhabi shows that the fire, initially claimed to have been brief and contained, was far worse than authorities had been prepared to admit.

Almost the entire upper fuselage, from just behind the wing box to a point aft of the flight deck, has been burned through to the crown. Structural failure has resulted in the empennage of the A300 dropping to the hangar floor. 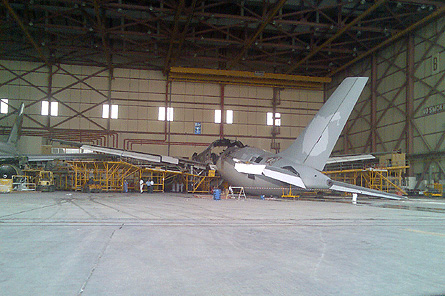 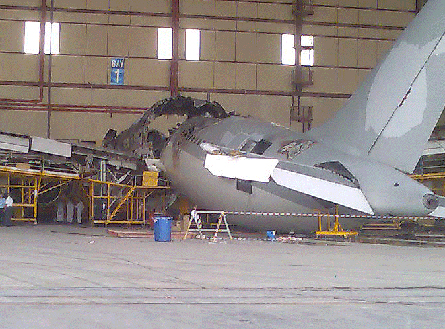 A Gamco source says the whole cabin has been gutted by the blaze and claims that the fire took between one and two hours to extinguish – adding that, although there were no fatalities, an engineer was seriously hurt after jumping from the A300.

Images obtained by FlightGlobal show that authorities have attempted to de-identify the jet by painting over the Qatar Airways logo on the tail fin.

The source says: “They didn’t have to bother with the name on the fuselage as it had been completely burned away.”

Two Airbus narrowbodies – an Air Mauritius A319 and a Kingfisher Airlines A320 – sustained damage from falling debris. The source adds that at least three other aircraft were in the same hangar at the time – a Gulf Air Boeing 767, an Air Deccan Airbus A320 and an unidentified Saudi Arabian Airlines jet – but survived unscathed.

The source says there is no damage to the hangar, because the fire was primarily contained within the A300. There are no indications yet as to the cause of the fire and investigations are continuing. 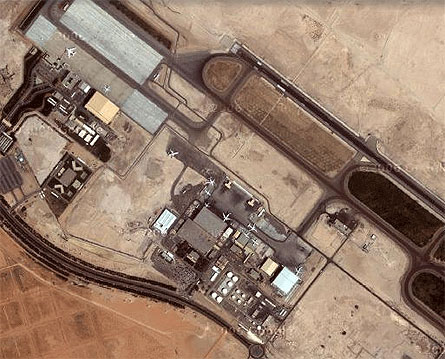