But the flight at the White Sands Missile Range in New Mexico was not witnessed by an official of the Fédération Aéronautique Internationale and may not stand as an official record, admits the UK technology company.

Launched by hand, the electrically driven Zephyr has a wingspan of 18m, but weighs just 30kg. Solar arrays covering the wing power the UAV by day and recharge the batteries that power the vehicle by night.

The latest trials validated modifications to improve the efficiency of the power system, Qinetiq says, including new amorphous silicon solar arrays supplied by United Solar Ovic and a full set of lithium-sulphur batteries from Sion Power.

During the trials in the summer heat of New Mexico's high desert the aircraft was flown two times - once for 54h to a maximum altitude of 58,355ft and once for 33h 43min to 52,247ft - carrying a surveillance payload. 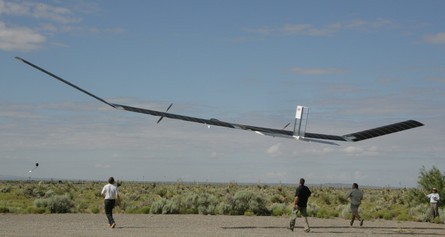