Sukhoi’s civil aircraft division has commenced testing of a new Russian-built air-conditioning system as part of its development of a revised Superjet 100 with greater domestic content.

The ‘SSJ New’ is intended to have a higher proportion of Russian-supplied systems and components, under an import-substitution strategy for the country’s aviation industry.

It is testing the key air-cooling unit which moderates the hot incoming air from the Superjet’s engines and auxiliary power unit.

“This is one of the important components and stages in the establishment of the prototype version of the SSJ New,” says the airframer.

Deputy general director for development Andrei Nedosekin says the manufacturer aims to reduce the cost of the aircraft and increase its reliability “without compromising the comfort level”.

Russian supplier Teploobmennik, based in Nizhny Novgorod, has developed the air-conditioning system and, having carried out bench tests, will gather data from flight tests to refine the equipment. 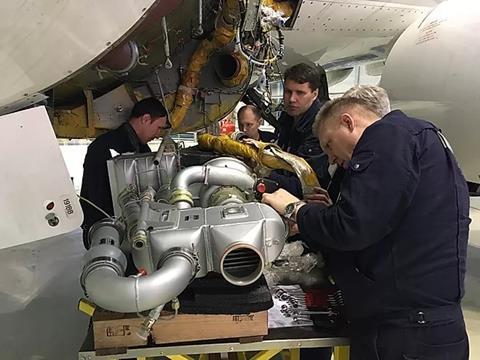 Teploobmennik general director Viktor Tyatinkin says the “complex” system is “similar” in size, weight and technical characteristics to the equipment already used for the Superjet 100.

“Research carried out during the development process has revealed possibilities for improving [the system], reducing the weight and increasing its heating and cooling capacity,” he adds.

Around 90% of Teploobmennik’s system features domestic components but Sukhoi Civil Aircraft says it expects the remaining 10% to transition to domestic parts by the time the SSJ New enters service.